“Marisa Merz: The Sky is a Great Space,” running through Aug. 20, will be among the exhibits at the Hammer Museum throughout the summer. Merz is an Italian painter, sculptor and installation artist. 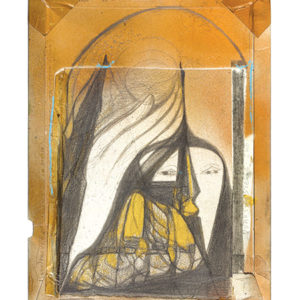 This untitled work by Marisa Merz – made with graphite, metallic paint, pastel, ballpoint pen and adhesive tape on paper – will be included in the Hammer’s summer exhibitions. (photo courtesy of Marisa Merz and Fondazione Merz)

This exhibit is Merz’s first U.S. retrospective, bringing together five decades of her work.

Merz gained international prominence as part of the circle of artists associated with Arte Povera in the late 1960s. An avant-garde movement that rejected Italy’s material wealth in favor of “poor” materials, Arte Povera was identified with the radicalism of the student movement, but proclaimed no stylistic or idealogical credo except the negation of existing codes and art world limitations.

Although she was included in important presentations of Arte Povera, Merz has remained a marginal figure, even within that context. As the sole female protagonist of the movement, and one of the few Italian women to exhibit in major venues around the world, Merz’s challenging and evocative body of work, marked by great variety in scale and material, is inflected by sexual and cultural difference. Ultimately, Merz’s work is as much a response to her own experience as it is to the art of her contemporaries.

Another Hammer exhibit running this summer is “Living Apart Together: Recent Acquisitions,” which highlights the ways in which the Hammer continues to build its collection with an emphasis on Los Angeles through a range of media, paying close attention to film/video works on paper.

The Hammer Musuem is located at 10899 Wilshire Blvd. For information, visit hammer.ucla.edu.