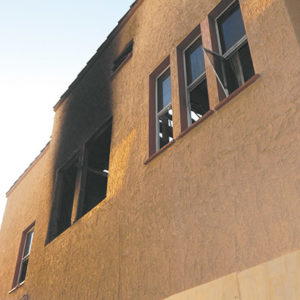 The flames damaged a second-floor unit. Transients may have been living inside the building. (photo by Edwin Folven)

Los Angeles Fire Department is investigating a blaze in a vacant apartment building at the corner of Hayworth and Willoughby avenues that damaged a second-floor unit and spread throughout the attic.

The fire was reported shortly before 8 a.m. on June 18 in a building at 857 N. Hayworth Ave. Firefighters arrived to find smoke coming from the second story. Eighty-five LAFD firefighters battled the blaze with the help of Los Angeles County Fire Department personnel from West Hollywood. The blaze was extinguished in just over 20 minutes.

LAFD spokeswoman Amy Bastman said there was no estimate of loss and damage. The two-story building has been vacant for two months, said Ronnie Franks, who manages a nearby building on Edinburgh Avenue. Franks added that he suspects the fire was started by transients living in the building.

“They boarded it up and immediately the squatters showed up,” Franks said. “They’re going to tear it down but in the meantime, it was full of transients. We tried complaining but nobody did anything. The whole thing is disgusting. It’s happening all over the city.”