A male suspect was arrested on Monday in connection with a fire that heavily damaged an apartment building under construction on Heliotrope Drive in East Hollywood and displaced 20 residents in nearby structures. 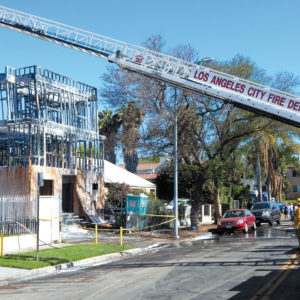 The fire damaged an apartment building under construction on Heliotrope Drive, as well as neighboring structures. (photo by Edwin Folven)

Authorities said the fire was arson. Residents notified LAFD investigators about a man who may have been starting fires in the neighborhood and he was taken into custody a short distance from the scene. The man was identified as Benicio Garcia, 20. He was booked for arson and is being held on $75,000 bail. Scott said the investigation is ongoing and had no further information.

The exact cause of the blaze and the loss remain under investigation.

‘Home – So Different, So Appealing’ to debut at LACMA

Watch ‘The Mummy,’ lose your soul