Fairfax District resident George Epstein has been honored with the Kushner Award from the International Society for the Advancement of Material and Process Engineering (SAMPE).

Formerly known as the SAMPE Space Award, the Kushner Award recognizes dedicated individuals who have provided exceptional service in promoting the ideals of the Society over many years. 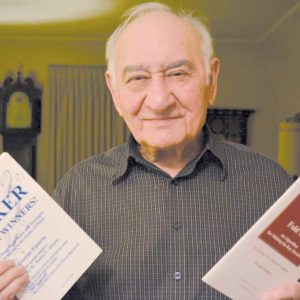 George “The Engineer” Epstein was recognized with SAMPE’s Kushner Award. He is pictured with books he authored on playing poker.
(photo courtesy of the Epstein family)

Epstein has received numerous awards and commendations for his contributions related to composite materials, including their use in major U.S. space and defense programs such as GPS, communications satellites and launch vehicles. Especially significant was his work in creating the Air Force Manufacturing Problem Prevention Program, which has helped the United States avoid costly anomalies and operational failures with space and missile systems.

The Society of Plastics Engineers (SPE) created a college scholarship in his honor. In 1990, The SPE gave Epstein the Fred O. Conley Award for outstanding achievements in plastics engineering/technology. Epstein was named a fellow of the Society in 2009.

Epstein’s other honors include SAMPE’s Lubin Award, given in 1963 for “his consistent and sustained high level of technical contributions and his pioneering efforts in composites and adhesives technologies.” He was elected a SAMPE fellow in 1987. SAMPE also bestows scholarship annually to Fairfax High School students in honor of his late wife, Irene Epstein.

In 2008, Epstein was named Senior Citizen Volunteer of the Year by the Westside Optimist Club for introducing seniors to poker as a recreational activity. Recently, Epstein was elected to the Seniors Poker Hall of Fame.

Pink’s honored as one of the ‘Heroes of Hollywood’