Over the course of six years, a bridge connecting Griffith Park with Atwater Village evolved from a less-than-$5-million, mostly privately funded endeavor into a $16.15 million project financed largely by the public.

The bridge was originally going to be a gift from real estate investor Morton La Kretz, and the project was to be completed by River L.A., then known as the Los Angeles River Revitalization Corporation. Then-Councilmen Tom LaBonge, 4th District, and Eric Garcetti, 13th District, presented a motion in 2011 to accept the bridge “as a gift to the city, named after the donor or whomever the donor designates.” 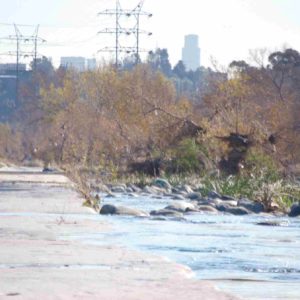 Former Councilmen Tom LaBonge, 4th District, and Eric Garcetti, 13th District, presented a motion in 2011 to accept a bridge “as a gift to the city, named after the donor or whomever the donor designates.”
(photo by Edwin Folven)

“Upon receipt, the city of Los Angeles will own, operate and maintain the bridge in perpetuity,” the motion stated.

Now, La Kretz’s contributions will account for just $3.89 million of the more than $16 million total budget. (Another $861,397 has been spent in due diligence, permitting and design costs.)

Ten years of maintenance for the cable-stayed bridge will run an estimated $900,000.

At a May 1 hearing about the bridge in the Arts, Parks and River Committee, Councilman Mitch O’Farrell, 13th District, criticized the “opulent” nature of the approximately 320-foot long, cable-stayed bridge, when a more utilitarian design would have sufficed.

Instead, he continued, the project entails “a $16.12 million bridge that the community didn’t really ask for, as far as the particular design.”

“[River L.A.] will manage the project, including preparation of environmental plans, design and construction,” the report said. “Once completed, [River L.A.] would donate the bridge to the city.”

La Kretz, in a letter to River L.A. executive director Omar Brownson dated December 2011, when the project commenced, touted the bridge as a way to “revitalize the Los Angeles River and raise its profile as a valuable city asset.”

“In a time of aging infrastructure and constrained municipal budgets, I am hopeful that our partnership can demonstrate the viability of public-private partnerships and the need for cooperation to solve larger, more complex challenges like the revitalization of the Los Angeles River,” he said.

The project has run into other complications over the years as well. River L.A. was on the verge of acquiring a $3.6 million grant from the California Department of Transportation. But a mandatory audit to secure the grant revealed “inadequate procurement procedures.” River L.A. ultimately transferred the bridge project to the city of Los Angeles to preserve the grant, but the group remains involved.

Despite the higher budget and reservations by city officials and some local residents, a few local organizations have urged the city to complete the bridge.

Judith Kieffer, executive director of the nonprofit Los Angeles Parks Foundation, said in a letter that her organization is proud to support the bridge.

“This incredibly significant project to connect everyone in our city represents the kind of city where everyone has access to the L.A. River and beyond,” she said.

Irma Munoz, chairwoman of the Santa Monica Mountains Conservancy, also sent a letter in support of the bridge.

“This project will provide a safe, convenient connection from residential communities on the east side to both the bike path and all the other recreational opportunities such as Griffith Park and the network of river pocket parks,” Munoz said. “As the river bike path is extended both through downtown and further into the San Fernando Valley, the path will encourage more local residents to utilize the river for recreation and commuting, and will reinforce the river’s role as a regional trail connection.”

Councilman David Ryu, 4th District, said he supports safer access to Griffith Park for pedestrians, bicyclists and equestrians that the bridge would provide.

“This is another important step toward achieving our vision for a community friendly and environmentally responsible Los Angeles River,” he said.