Decking near Wilshire and Fairfax completed weeks ahead of schedule

Construction at Wilshire Boulevard and Fairfax Avenue for the Purple Line Extension subway project has been completed five weekends earlier than originally scheduled.

The decking operation included excavating a portion of the roadway and replacing it with concrete deck panels as a temporary street surface while underground station excavation continues. 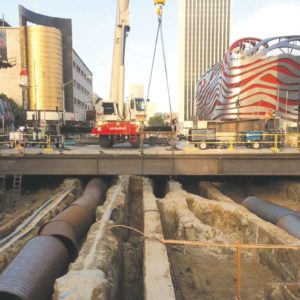 Deck panel installation was originally scheduled to occur over 18 weekends beginning in February. However, Metro and its contractor Skanska-Traylor-Shea (STS) were able to expedite work with early lane reductions on Fridays and close coordination with elected officials, community stakeholders and the city of Los Angeles resulting in an end to full weekend street closures five weeks ahead of schedule.

Street restoration work is scheduled to take place in July. Other construction activities ongoing at Wilshire/Fairfax include excavation and deck openings for deliveries.

Progress is also being made at Wilshire/La Cienega, the third planned subway station for the project’s first section.

STS is near completion with piling operations on the south side of Wilshire and will be switching to the north side toward the end of June.

The construction will require some lane reductions for approximately eight to 10 months.

The 3.9-mile first section of the Purple Line Extension will extend the subway from its current terminus at Wilshire/Western to Wilshire/La Cienega. The first section is scheduled to open in late 2023.

The second section will extend the subway to downtown Beverly Hills, and the third section to Westwood.

Metro’s said its goal is to complete the project by 2024 if federal funding can be secured for the third section.

Board extends contract for LAUSD superintendent