Death of St. Vincent Meals on Wheels founder mourned by many

For the past 40 years, Sister Alice Marie Quinn was a lifesaver for seniors in need, providing daily meals on their doorstep through St. Vincent Meals on Wheels, an organization she founded on July 7, 1977.

Now, many people in the community are mourning the venerable nun, affectionately known as “Sister Sam,” after she died from natural causes on June 23 at the age of 82.

“God wanted her right away to straighten up the kitchen up there in heaven,” said former 4th District Councilman Tom LaBonge, a longtime friend and supporter of Quinn and St. Vincent Meals on Wheels. “She had a deep relationship with my former boss, [City Council President] John Ferraro. I saw her three weeks before she died. She was one of the greatest human beings to ever walk on the face of this Earth.”

Thousands of seniors in the community agree, said Daryl Twerdahl, a longtime volunteer and staff member who is serving as interim executive director of St. Vincent Meals on Wheels. 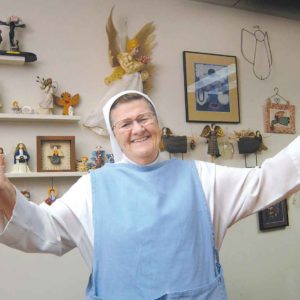 “I have had so many opportunities [since Quinn’s passing] to speak with people we served, and the interesting thing is that although they never met Sam, they felt like they know her,” Twerdahl said. “We have about 1,800 seniors who receive direct services. She really meant a lot to them.”

Twerdahl said the organization’s senior clients received a notice about Quinn’s death and have been reassured that St. Vincent Meals on Wheels will continue to provide daily nutritious meals. Some seniors receive two meals while others receive three. Most live in the neighborhoods surrounding St. Vincent Medical Center, near Third and Alvarado streets, but some reside miles away.

“We deliver wherever the need arises,” she added. “Since 1977, we have followed the same values of compassion and respect for the people we serve.”

Quinn sent birthday cards, poems and notes wishing their clients well, which is very positive for people who are homebound and have little contact with others, Twerdahl said. St. Vincent Meals on Wheels will continue that tradition.

“One of the things we are doing is making sure those things remain in place,” she said.

Quinn dedicated herself to serving others at an early age. She was born in June 15, 1935 in Chicago, and later moved to Albuquerque, New Mexico, where she graduated high school. She joined the Daughters of Charity in 1954 and after completing her religious formation, she trained professionally as a dietician.

Quinn first served with the Daughters of Charity in New Orleans and later in Northern California, before being assigned to St. Vincent Medical Center in Los Angeles. Through her work at the hospital as assistant dietary director, she noticed that there were seniors who needed nutritional care after they left the facility and few options existed at the time.

Quinn started St. Vincent Meals on Wheels with a single pot of stew cooked in a church basement near Mac Arthur Park that was served to 83 seniors. The program grew exponentially over the years, and now serves 2,900 to 3,500 meals per day.

“In the beginning, it was just us and a few pots of stew. But the response was tremendous, and it became impossible to ignore the great need in the community. Over the years, it became so much more than plates of food; it became friendship, family and nourishment for the soul,” read a quote from Quinn posted on St. Vincent Meals on Wheel’s website.

“Our hearts are filled with sorrow and with love as we say goodbye to our dear Sister Alice Marie,” said Sister Patricia Miguel, of the Daughters of Charity. “Her life of service has inspired everyone who knew her. She never wavered in her commitment to serve the homebound seniors and those living in poverty. May the Lord have mercy on her soul as she enters into the loving hands of her creator.”

Twerdahl, who started with St. Vincent Meals on Wheels as a volunteer in 1989 and served as director of development for the past 15 years, said Quinn’s legacy will live on.

“Sister Alice Marie mentored us, loved us, chided us, but above all else, she taught us to serve with compassion and respect,” Twerdahl said. “We will continue her legacy with every meal served.”

Quinn is survived by her sister Bridget Johnson and numerous nieces and nephews. Funeral serves were held on Wednesday at St. Vincent de Paul Church on Adams Boulevard, and interment was at Resurrection Cemetery in Montebello.