In an effort to combat rising temperatures, the Los Angeles Bureau of Street Services has started coating select streets with cool pavement to reduce heat absorption by the streets. 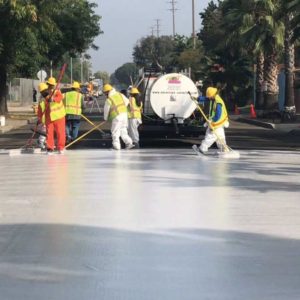 The new technology will get a trial run on one street in each council district.

In Council District 5, Packard Street, between Fairfax and Hayworth avenues, will be covered in cool pavement, according to Alison Simard, a spokeswoman for Councilman Paul Koretz, 5th District. The work is tentatively scheduled for June 24 at 9 a.m.

In Council District 13, Coronado Street, between Berkeley Avenue and Mayberry Street, will be coated with cool pavement, according to Tony Arranaga, a spokesman for Councilman Mitch O’Farrell, 13th District. The work is tentatively scheduled for July.