O’Farrell, 13th District, wants to recognize the contributions and sacrifices of Native Americans in Los Angeles by replacing Columbus Day, named after the Italian explorer and observed on the second Monday in October, with Indigenous Peoples Day. Many Native Americans are offended by Columbus Day, contending the explorer’s discovery of North America resulted in the death and suffering of the native population. 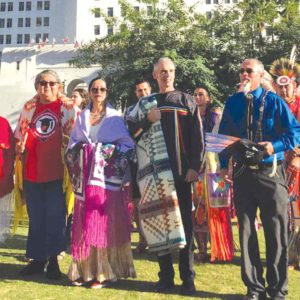 “Let us not miss this opportunity to right a historic wrong and replace Columbus Day with Indigenous Peoples Day,” said O’Farrell, a member of the Wyandotte Native American tribe. “I feel hopeful and I am enormously encouraged that Angelenos will have a yearly celebration that everyone can be proud of. This is a big step forward toward a restorative, healing process for the Native American community.”

The proposal is next expected to be considered by the full City Council in late July or August after its summer recess. It has received opposition from Councilman Joe Buscaino, 15th District, who is of Italian American heritage. Buscaino contends that Columbus Day is an important holiday for Italian Americans. He is open to creating Indigenous Peoples Day on a date other than Columbus Day.

If the City Council decides to supplant Columbus Day, Buscaino called for the creation of Immigrant Heritage Day instead.

The proposal came in a letter submitted to the REIGN Committee on June 14 that was signed by Buscaino and Councilmen David Ryu, 4th District; Gil Cedillo, 1st District; and Mitchell Englander, 12th District. The authors of the letter stated that when Columbus Day was established in the 1930s, the idea was to celebrate immigration and American patriotism. As times changed, the holiday became more about immigration, as opposed to Columbus.

“We believe that it is this concept, the celebration of immigrants, the melding of cultures, the beauty of people who have multiple backgrounds of European, African, Asian and Indigenous heritage, that reflects the reality of who we are as a people today,” the letter read. “While we support the creation of a separate Indigenous People’s Day holiday, this is not a zero-sum game where one culture must win at the expense of others. We believe that it is important to remain true to the spirit behind the founding of the holiday on the second Monday of October, which is not about honoring one man, but about a universal theme that has become ubiquitous with the celebration of not only Italian-American Heritage, but the celebration of all cultures and the acknowledgement of the sacrifices and contributions made by their parents, grandparents and great-grandparents to this great nation.”

O’Farrell said he strongly disagrees. While the idea of creating Immigrant Heritage Day has merit, it shouldn’t supplant Columbus Day. He said that wouldn’t take into account the plight of Native Americans and African Americans, whose ancestors were primarily brought to America as the result of the slave trade.

“June is Immigrant Heritage Month in Los Angeles, and it would make perfect sense to select a date in June,” O’Farrell said. “I am open to any other time. But we must not confuse. [The proposal for Immigrant Heritage Day] is problematic in many ways. It sweeps aside the historical record. It essentially leaves out Native Americans and descendants of African slaves’ interests.”