Beverly Hills will add bicycle lanes along North Santa Monica Boulevard, joining its neighboring cities in making the roads safer for cyclists, after a unanimous vote by the City Council late Tuesday night.

“This is a truly wonderful day in our city,” Mayor Lili Bosse said. “It’s really important that people recognize that if you’re on a bicycle or you’re in a car, you have equal rights.” 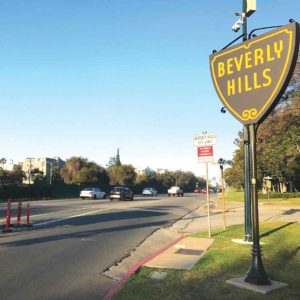 Bike lanes on this stretch of Santa Monica Boulevard will hopefully improve safety for bicyclists and motorists.
(photo by Luke Harold)

Ongoing construction along Santa Monica Boulevard compelled the vote. City staff needed instruction from council about working bicycle lanes into the striping of the street once the work is completed in late spring or early summer 2018. Council members and residents also said the lanes would oblige shifting lifestyle trends.

Research by traffic consultant Iteris and city staff said in a report that adding bicycle lanes on North Santa Monica Boulevard, between Doheny Drive and Wilshire Boulevard, would make the street safer for bicyclists and make drivers more aware of bicycles on the road. It also listed a false sense of security for bicyclists and increased accumulation of debris and dust on the street as potential disadvantages.

Former Beverly Hills council members Robert K. Tanenbaum and Nancy Krasne were the first two speakers to address the council about the agenda item. In contradiction to most research, they said that the bicycle lanes would make the street less safe for cyclists and drivers.

But almost all of the more than 40 speakers who followed – mostly Beverly Hills residents, with several residents from neighboring communities who said they bike through Beverly Hills regularly – supported the lanes.

As a crossing guard, Beverly Hills resident Ellen Lutwak said she has seen plenty of bicyclists on their way to work and school, and the city should take steps to ensure their safety.

Representatives from the Mid City West Community Council were among the contingent of speakers from outside Beverly Hills who asked the City Council to move the plans forward.

“I hope you will follow the lead of many other cities in the area,” said Taylor Nichols, of Mid City West.

Lyndsey Nolan, policy and outreach coordinator for the Los Angeles Bicycle Coalition, said Beverly Hills will become “part of a wider network” in accommodating the county’s growing number of bicyclists.

“This will help to ensure and enhance the safety of all road users,” she said.

Bosse, who has long been an advocate of adding bicycle lanes in Beverly Hills, said “it’s been shameful” that Beverly Hills has been “the missing piece” compared to surrounding areas in terms of adding bike lanes. Adding additional lanes throughout the entire city, she continued, is her long-term goal.

Councilman Robert Wunderlich said he’s heard from the opposition, but “I’ve spoken with many more people who are in favor of the bike lanes.”

“It positions us for the future,” he said.

Councilman John Mirisch said he supported the bicycle lanes for the increased safety of residents riding their bikes through the city, and that it didn’t appear there were any cyclists among the handful of speakers opposing their installation.

“That just is a little bizarre,” he said.

The City Council members favored painting the bicycle lanes green, or possibly another color, for increased visibility, as opposed to only painting a white stripe on each side of the boulevard. Painted bicycle lanes would cost approximately $300,000, compared to $15,000 for only a white stripe, and would require annual repainting.

In celebration of the City Council’s vote, Bosse, who leads regular “Walk with the Mayor” events on most Mondays, said she will announce plans for a “Bike with the Mayor” meetup. [Update: Bosse tweeted plans the next day.]

Bike With The Mayor! Join me Sunday Aug 20 8:30am in front of City Hall, Crescent side @CityofBevHills @LoveBevHills #bhhealthycity pic.twitter.com/OU2UZWncCx

This is wonderful news!