Beverly Hills Mayor Lili Bosse and Los Angeles Mayor Eric Garcetti were among a group of mayors from across the U.S. to convene in Miami Beach for the U.S. Conference of Mayors (USCM), held from June 23-26. 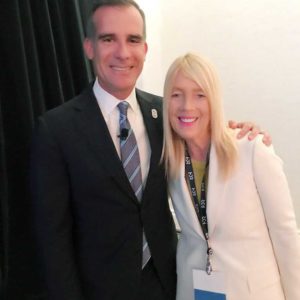 The city of Beverly Hills was honored with a resolution recognizing Bosse’s #BHHealthyCity program, which includes her weekly Walk with the Mayor meetups. The resolution encouraged all cities to develop their own health and wellness programs.

“I was thrilled that the other mayors embraced the Healthy City program,” Bosse said. “Several mayors personally told me that they intend to start a Walk with the Mayor program and many others were very excited about our B.O.L.D. initiative. Health and wellness as public policy is an idea whose time has come.”

The Incoming USCM President, Mayor Mitch Landrieu of New Orleans, urged Americans to move past Washington’s stalled partisan gridlock and to instead look locally for leadership that governs with vision and delivers results. The bipartisan group unveiled Leadership for America: Mayors’ Agenda for the Future, (Twitter hashtag #MayorsAgenda) a policy proposal that will fix crumbling infrastructure, ensure quality affordable healthcare, promote safe and secure communities, expand the workforce to drive economic growth and create equitable communities to increase opportunity for all.

“We are being called upon in a chaotic moment to bring certainty, calm and sobriety to the most complicated issues facing our country. As mayors, and as we have always done, we will show up as duty calls, and will deliver every day: if we don’t produce then we haven’t succeeded. This is a group of great leaders who don’t just talk about what to do, but know how to do it – and actually get it done,” Landrieu said.

“Mayors are builders,” Garcetti said. “We build opportunity, we build the physical infrastructure for our streets, waterways, ports, airports, and factories. Most importantly, we’re not just talking about it, since mayors are judged on results, not rhetoric. We’re actually building America’s future.”

Routine call for help in Hollywood turns into officer-involved shooting