Assemblyman recognizes veteran of the year

Assemblyman Richard Bloom (D-Santa Monica) on June 21 honored Grant Royal as veteran of the year for the 50th Assembly District. 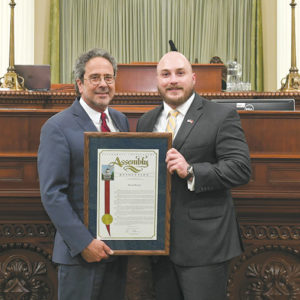 “Grant distinguished himself as a leader and teacher during his service in the Marine Corps,” said Bloom (left). “[Presently], he distinguishes himself by serving as a role model and assisting other veterans as they re-integrate into civilian life. I want to personally thank him for his contributions to our country, our state, and our community.”

Royal served in the United States Marine Corps from 2004-2012 and was deployed three times as part of Operation Iraqi Freedom. He led a six-man combat team with the First Battalion First Marines. One deployment was to the Babil Provence in Iraq, and the other two were to the Al-Anbar Province.

Royal left the Marine Corps in 2012 and attended Santa Monica College before transferring to UCLA and graduating in 2016 with a degree in anthropology. While at UCLA, Grant worked at the campus veteran resource center helping veterans re-integrate into civilian life.

Royal is currently a law student at Pepperdine University School of Law in Malibu. He serves as vice president of the Veterans Legal Society and works as a volunteer law clerk at the Los Angeles County District Attorney’s Office in the Hardcore Gang Division.

WeHo video helps people get around without a car