Why did the museum cross the road? 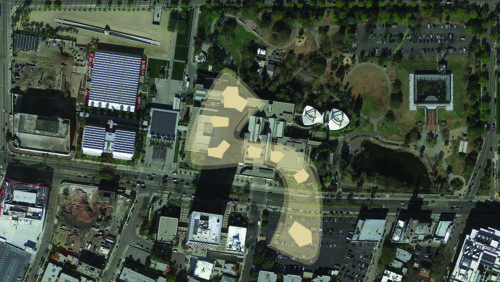 Renderings show how LACMA will bridge across Wilshire to where the parking lot is now.
(rendering by Atelier Peter Zumthor)

The Los Angeles City Council on Wednesday unanimously directed the city engineer to initiate the process to clear the way for the proposed new LACMA building to stretch more than 100 feet across Wilshire Boulevard.

For years, the Los Angeles County Museum of Art (LACMA) and its director Michael Govan have been advocating for a massive renovation of the museum’s campus by replacing older buildings with one new building that will come with a unique twist – or rather, a unique S-shape structure – which will be constructed above traffic on the Miracle Mile corridor.

The museum will rest on the south side of Wilshire on land owned by the museum at the southeast corner of Wilshire and Spaulding Avenue. However, while the county owns the museum and will be the primary authority for review and approval of the proposed project, the city owns Wilshire Boulevard and the air above it. The city will participate in preparation of the environmental impact report (EIR) for the elevated wing of the new building that crosses Wilshire Boulevard. Thus, on Wednesday, the Los Angeles City Council voted to investigate the feasibility of vacating the airspace approximately 21-28 feet above the public right-of-way on Wilshire between Spaulding and Stanley Avenues. Miranda Carroll, director of communications for LACMA, said the application for vacation of airspace is expected to take months before it is done and approved.

The proposed $600 million LACMA building will be approximately 368,000 square feet, and replace four buildings within LACMA’s east campus – the Ahmanson, Art of the Americas, and Hammer buildings, as well as the Leo S. Bing Center. The facilities on the west side of the campus – BCAM, Resnick Pavilion, Pritzker parking garage and the Pavilion for Japanese Art – will remain. The project would result in a reduction overall of approximately 25,000 square feet.

The most recent updates to the design replaces the original black color of the main structure with sand-colored concrete.

The environmental quality study is underway. 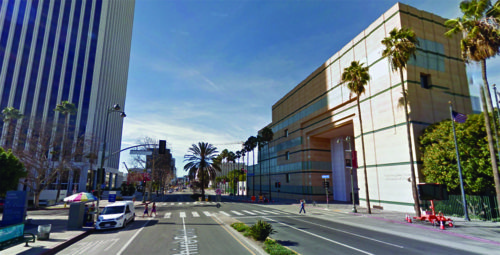 LACMA’s plan includes bridging Wilshire Boulevard from its current campus to a new facility on the south side.
(courtesy of Google Maps)

The project design will open up two-and-a-half acres of new public outdoor space, including landscaped outdoor plazas, public programming and educational spaces, sculpture gardens and native and drought-tolerant vegetation integrated with the new building and the surrounding park.

LACMA hopes to begin construction in the second half of 2018, and complete the project in 2023 when the Metro Purple Line subway will open.