Two men were killed on May 14 at approximately 2 a.m. after a stolen vehicle they were driving collided with a tree on Hollywood Boulevard, just east of Gower Street.

Det. Jason Loya, with the Los Angeles Police Department’s Multidisciplinary Collision Investigation Team (MCIT), said patrol offers checking license plates for stolen vehicles along Hollywood Boulevard located a 1993 Honda Accord that was reported stolen from the city of Hawthorne. Officers attempted to pull over the Honda, with two men inside, but the driver sped away eastbound on Hollywood Boulevard. 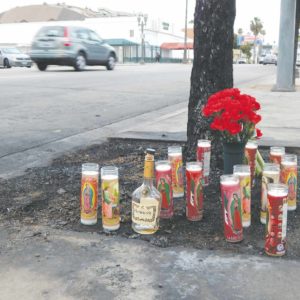 Flowers and candles were placed at the site of a collision on Hollywood Boulevard on May 14 that claimed the lives of two men.
(photo by Edwin Folven)

“The suspects were going 70 to 90 miles per hour when they lost control,” Loya said. “They were heading eastbound on Hollywood Boulevard and briefly crossed into the westbound number one lane before losing control and striking the curb and a tree.”

Loya said the officers pursued the vehicle one or two blocks before the collision. The Honda burst into flames after the crash and the officers were unable to extricate the people from the vehicle.

After the fire was extinguished, paramedics pronounced the men dead at the scene. Los Angeles County Coroner’s Office spokesman Ed Winter said the victims’ names were not being released pending notification of next of kin. Flowers and candles had been placed at the scene of the collision on Monday.

Loya said the MCIT is investigating the collision because it involved a police pursuit. He added that investigators found a loaded gun inside the vehicle. The firearm has been sent to a police laboratory for testing to determine if it was stolen, he added. Detectives also worked with nearby businesses, including Toyota of Hollywood, to obtain security camera footage of the incident. The investigation is ongoing.

The incident occurred at a time when many nightclubs and bars in the area were closing.

“When it first happened, there was heavy vehicle traffic and heavy pedestrian traffic,” Loya added. “The speed limit is 35. It’s fortunate nobody else was hurt.”