The proposal by R.D. Olson Development includes a zone and height change for the property, and demolition of a one-story, Jack In The Box restaurant.

Opposition mounted last month with the launch of an ad campaign by UNITE HERE Local 11 – a labor union that represents more than 23,000 hospitality workers in hotels, restaurants, universities and convention centers. The ad campaign – “Keep Hollywood Queer” – includes posters on bus benches in Hollywood that condemn the proposal’s developer. The president of the construction branch of the company, Bill Wilhelm, was connected to Legatus, a Christian fundamentalist group linked to “anti-gay” organizations that publish articles supporting “conversion therapy” for LGBT children, as well as the criminalization of abortion and repeal of marriage equality. 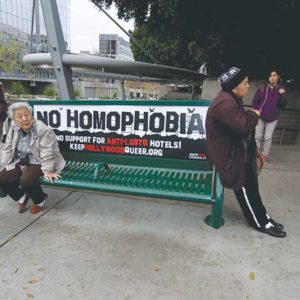 A labor union launched an ad campaign to stop a hotel proposal for its connections to “anti-LGBT” groups.
(courtesy of UNITE HERE Local 11)

“At R.D. Olson Construction, we are committed to fostering, cultivating and preserving a culture of diversity and inclusion,” he wrote in a letter. “Although I remain a devout Catholic, some of Legatus’ beliefs regarding sexual orientation and women’s rights do not represent my own. My decision to part ways with this organization is simply a personal decision, one that reflects my leadership philosophy.”

He added that the company will be a sponsor of Orange County’s LGBT Pride Parade for the first time on June 24, but that isn’t enough to solve the issues for UNITE HERE.

On Wednesday, Elle Farmer – a spokesperson for UNITE HERE – said resigning from “a really really horrible organization” doesn’t make up for joining it in the first place. Farmer said Wilhelm has had months to respond to UNITE HERE’s opposition, but is just now taking action to save his reputation to get the project approved.

“I cannot be in the mind of Bill Wilhelm, nor do I want to be, but it looks that way,” Farmer said.

Joey Sanchez, communications director of the construction company for R.D. Olson, said the union’s opposition is a “bullying tactic” to “force us to agree to a lot of their labor agreements.” Sanchez said on the construction side, they have had a fair hiring process that has celebrated diversity. In April, Sanchez added that he is gay and that Wilhelm has never had an issue with gay people.

“Unite Here is zealously claiming the R.D. Olson hotel proposed on Sunset Boulevard will discriminate against the LGBT community,” he said. “In my experience, there has been nothing homophobic about R.D. Olson’s approach to this project. In fact, they have agreed to work with me to create an LGBT jobs pipeline. My record reflects that I believe in fair wages and good working conditions, but as a gay man, I am extremely disappointed that Unite Here has sought to drive a wedge within my community in this way.”

“The head of our policy and community building department and members of his team met with Bill Wilhelm, president of R.D. Olson Construction, to encourage him to sever his relationship with the anti-LGBT organization Legatus,” Diaz said. “We’ve learned he has. While we’ve always been strong supporters of fair wages and practices – and the Center is a union organization – we have not taken a position on this development.”

Farmer said the union has a list of remaining concerns that it would have raised even if Wilhem was never involved, including concerns about the size of the proposal and the environmental effects on the community, as it requires a height and zone change in the city’s code, as well as construction noise and traffic impacts.

“The environmental review for this is inadequate,” Farmer said.

Anthony Wrzosek, vice president of panning and development for R.D. Olson Development, said their attorneys and consultants are responding to the environmental-related concerns and they feel they have addressed all other issues.

Farmer added that it’s certainly possible for Wilhem to turn things around as good actors.

“But they spent time and money being bad actors,” Farmer said. “You have to actually take positive steps toward fixing that, such as working with the community in a real way.”

The PLUM Committee is expected to consider the proposal in mid-June.