‘Pirates of the Caribbean’ sinks another cursed sequel

Here we are for another round of “yo ho, yo ho,” but the pirate’s life isn’t for anyone anymore.

“Pirates of the Caribbean: Dead Men Tell No Tales,” a title more suited for a tagline, proves for a fourth time this franchise is a sinking ship guided by fragments of a burnt map, forever failing to rediscover the first entry’s glorious success.

Apparently Captain Jack Sparrow (Johnny Depp) gets around. During his heyday, he angered the crew of the Black Pearl, Davy Jones and Blackbeard. But it all began when he took down his first foe, Captain Salazar (Javier Bardem), the top pirate hunter of the Spanish Navy, who befell a curse and now bides his time until he can exact vengeance. 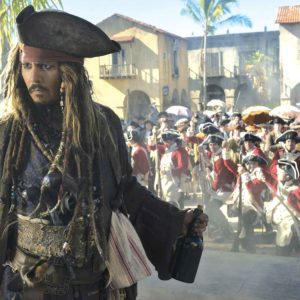 Jack Sparrow (Johnny Depp) has lost his luster over the course of the franchise.
(photo courtesy of Walt Disney Pictures)

Now, Salazar attacks all ships that venture into the Devil’s Triangle, leaving only one to tell the tale since “dead men tell no tales,” as he says to the latest designated survivor, young Henry Turner (Brenton Thwaites), the son of Will (Orlando Bloom) and Elizabeth Turner (Keira Knightly). What an unlikely coincidence.

Eventually, Sparrow, young Turner and a new player, Carina Smyth (Kaya Scodelario), who is continually labeled a witch because she understands science, enter each others’ lives on a small British-ruled island and the adventure begins. Their only hope is to locate a special device that can undo any curse of the deep blue sea.

Once, the great Jack Sparrow was maker of his destiny. A great swordsman and strategist, he could devise a plan to suit any situation. During his fifth great adventure, Jack controls nothing. Everything happens to him. Much like the actions of Indiana Jones in “Raiders of the Lost Ark,” our leading man’s action sequences don’t move the plotline forward. The result is much the same regardless of his presence.

No longer a charming, quirky character, the Captain is tired, more drunk than usual, unable to muster up much likability, a problem for everyone else as well. Captain Barbossa’s (Geoffrey Rush) clichéd pirate antics and mannerisms once sprung to life. Here, he’s more tired than Jack. As for our villain and young stars – who cares?

“The Curse of the Black Pearl” was a swashbuckling good time, complete with sea battles, action, character chemistry and a treasure hunt. Those elements appear here in a more superficial capacity. But like the performances, everything is phoned in. Rarely is an action film so yawn-inducing.

And then we have to experience a generic attempt at addressing sexism. Carina is a student of astronomy and horology. The first discipline marks her a witch by uneducated patriarchs, a move that becomes tedious and wildly over the top the more it appears. The second discipline’s proximity to the word “whore” leads to a series of juvenile jokes about Carina’s profession, a move that contradicts any attempts to sincerely claim this film elevates women.

Disney has a bad habit of going too big. It’s an old idea, spectacle over story, and here we are, once again, with another Disney blockbuster desperately craving an enormous pull at the box office. Whatever happened to a more modest action adventure? In this case “Black Pearl” fits that description compared to all the cartoonish visual effects in “Dead Men Tell No Tales” that merely prove graphics companies need some more lessons in verisimilitude.

“Pirates of the Caribbean” have a special super power: the ability to take major set pieces, like a bank heist where the building gets dragged away along with the vault, and make them seem like business as usual, something we easily witness every Tuesday afternoon. The entire process is numbing.

Perhaps dead men tell no tales, but how did the living create such a lifeless film that’s equal parts nostalgia and recycling? And even though marketing for the film declared this the end, apparently the cash-cow team now calls it “the beginning of the end.”

Why allow something to conclude when more and more shameless stories can continue to make us numb to visual effects, set pieces and any sense of wonder cinema once championed?

Otium at The Broad: The grand opulence of the museum is shared by the neighboring restaurant