The mixed-use project located at Poinsettia Place was created by AvalonBay Communities and the West Hollywood Community Housing Corporation. It features three, six-story buildings, with 77 units of affordable housing for seniors in a building facing Santa Monica Boulevard, and 294 market-rate apartments in the other buildings. Ground-level retail space is also included, and a Trader Joe’s market, which was formerly located at the former Movietown Square site, reopened in the new project. One additional tenant, Wells Fargo, has opened a branch at the site, and more retail shops are expected soon. 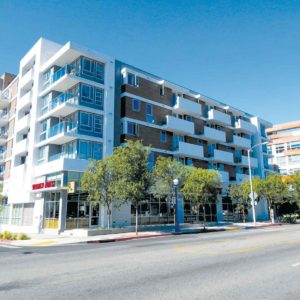 The Movietown Square project has been completed on Santa Monica Boulevard in West Hollywood, bringing market-rate and affordable senior housing to the city.
(photo by Edwin Folven)

“The exciting part is we have affordable units for older adults on limited incomes,” said West Hollywood Mayor Lauren Meister. “And Trader Joe’s is coming back. It’s great when we have a neighborhood-serving business in one of these projects.”

AvalonBay senior vice president of development Mark Janda said he is excited about the new project in West Hollywood, which was more than a decade in the making. The site formerly featured multiple small shops, a Trader Joe’s market and the Yukon Mining Co. restaurant.

“We are really happy,” Janda said. “First off, it’s providing much-needed housing for West Hollywood. It’s also located close to employment and studios. It’s nice to have housing close to jobs. It cuts down on traffic.”

I went to this event. Poorly organized. No signs in the parking structure or in the plaza. Worse was seeing the “affordable” units. Bizzare layouts and bathrooms with no walk in showers, just tubs with an entry side high enough to challenge anyone, yet alone a Senior Citizen. I guess the powers that be thought that anything they threw together would satisfy people desperate for housing, like one woman who said she had been on a West Hollywood waiting list for 13 years. For shame!

I am sorry to say that I agree with Mr. Morin’s comments. I too was shocked that a building, built SPECIFICALLY for seniors, a place one might assume one could “age in place” had bath tubs and NOT stall showers, and washer/dryers in the basement, (unlike the market rate apartments in the adjacent new buildings – all of which have their own in their units). Not to mention there is ONLY ONE ELEVATOR for all 77 of the affordable senior units! I am so sorry to see the glass half empty.