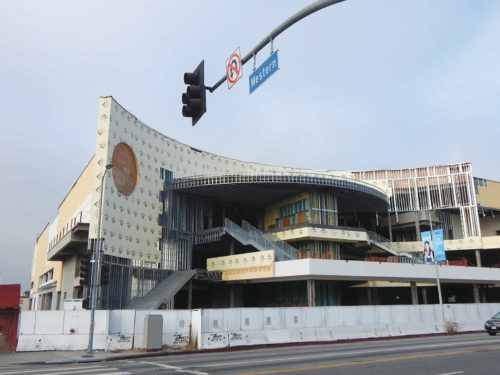 The unfinished Target store at the corner of Sunset Boulevard and Western Avenue in Hollywood will remain on hold indefinitely after a Los Angeles County Superior Court judge ruled in favor of a homeowners group that sued the city and Target over zoning changes.

Target filed its application for the project in 2008 and the Los Angeles City Council approved zoning changes in 2012, allowing construction to begin. The building has remained incomplete since 2014, when Judge Richard L. Fruin Jr. ruled in favor of the La Mirada Neighborhood Association in the first of two lawsuits filed over zoning changes, halting construction of the three-story structure.

The La Mirada Neighborhood Association’s original lawsuit contended the 74-foot project was much taller than the 35-foot height limit allowed under zoning regulations at the time, and Fruin ruled the City Council illegally changed the rules. Target and the city appealed that ruling.

In May 2016, the City Council approved changes to the area’s Station Neighborhood Area Plan (SNAP) – a larger plan governing planning in the surrounding neighborhood – which officials hoped would enable construction to proceed. Those changes also allowed for a 74-foot building.

The La Mirada Neighborhood Association filed a new lawsuit over the rule change, and the appellate court sent the matter back to the Los Angeles County Superior Court for consideration.

In a decision dated April 26, Fruin again ruled that the project violates the law because impacts to the community were not considered after the City Council changed the rules in May 2016. The parties involved in the lawsuit received the ruling on May 1.

The La Mirada Neighborhood Association, represented by attorney Robert Silverstein, contends that a new environmental impact report should be completed for the project because the city made changes to the SNAP. They will make that request to Fruin, who will make a final decision later on what must occur next for the development to proceed.

“By trying to retrofit the zoning to save Target’s illegal project, the City Council committed a new string of illegal acts,” Silverstein said. “For years, we have asked the City Council and Target to follow the law. It’s that basic. But they keep saying, ‘catch us if you can.’ That is not how elected officials should conduct the public’s business. It is the city that has kept the project in limbo by continually ignoring the public and the law.”

Rob Wilcox, a spokesman for the Los Angeles City Attorney’s Office, said the office is reviewing the ruling “and will be advising our client accordingly.”

Target issued a statement about the ruling.

“Target has been actively working with the city to take the appropriate steps to move forward with the L.A. Sunset store,” said Target spokeswoman Kristy Welker. “We’re disappointed in the recent ruling and are evaluating next steps.”

Councilman Mitch O’Farrell, 13th District, has worked on getting the Target project on track for years.

“The council member is disappointed,” said Tony Arranaga, communications director for O’Farrell. “He wants to see the Target store completed.”

La Mirada Homeowners Association member Doug Haines said the “proper outcome” would be for Target to demolish the existing building and construct a store that meets the area’s original 35-foot height limit. He added that the Target store could have been finished and opened a long time ago had the city restricted the structure to one story. Haines ran for City Council against O’Farrell in the March municipal election.

“The Target store could have and should have come in nine years ago,” Haines said. “The city and Target prevented that from happening. The fact is they changed the law and built the store illegally.”