The Mid City West Community Council took the first steps toward recognizing an underrepresented group in its community at an event to be scheduled in June.

The executive council of the Mid City West Community Council unanimously voted at its May 2 meeting to allocate a preliminary $400 budget for the event, which could be part of a series of similar gatherings throughout the city. 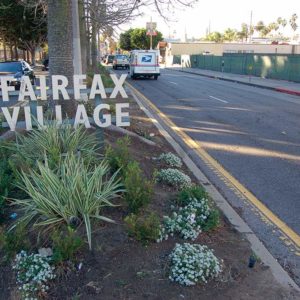 Mid City West businesses, including the ones in Fairfax Village, could benefit from the proposed event.
(photo by Luke Harold)

Each one represents an average of 38,000 Angelenos and receives an approximately $37,000 stipend of public funding to support events and programming. Neighborhood Empowerment is looking to host similar events dedicated to underrepresented groups in each neighborhood council.

Much of the planning, including the venue and the exact group in the community to be recognized,  will be determined. But during the executive council’s discussion, local businesses emerged as a frontrunner.

John Darnell, Mid City West’s representative from Neighborhood Empowerment, said many of the local businesses are not aware that they have a neighborhood council. Mid City West – which runs along Olympic Boulevard at its southernmost border, and north to West Hollywood, with its western border hugging Beverly Hills and running east to La Brea Avenue – boasts some of the more renowned shopping districts and eateries for tourists and locals.

“It’s a marathon, not a sprint,” Darnell, a former staffer for Councilman Paul Koretz, 5th District, said of the event’s ability to increase awareness of neighborhood councils.

The executive council also discussed the Russian population residing in its northern territory, near West Hollywood, and its senior citizen population as other possibilities for local groups that could be recognized.

Epstein also mentioned young people as another possibility. Mid City West’s board doesn’t have any “20-somethings,” he said.

Across the street from the executive council’s meeting room in the National Council of Jewish Women Los Angeles building on Fairfax Avenue, young people were lining up almost two hours early for a weekly poetry open mic at the Greenway Court Theatre. But local governments throughout the country have had a more difficult time generating that type of engagement by younger segments of the population. Teenagers also frequent the area’s businesses, especially after school lets out at nearby Fairfax High School.

If Mid City West decides to target its local businesses, the event could mirror efforts by some members of the city council to make Los Angeles more business friendly. Councilman Mitch O’Farrell, 13th District, launched an “Open for Business” program last July with the goal of streamlining the process for potential entrepreneurs to obtain permits and mitigate the upfront costs of opening a small business.

The area also benefits from the Fairfax Business Association, founded in 1996 by Jaqueline Canter, of Canter’s Deli, and community activist Ruth Williams. The organization has worked to keep streets clean and crime-free.

The city of Los Angeles has also held similar types of events to honor different segments of the local population. City officials this year declared May 2 as “Fresh Off the Boat Day,” a reference to a popular ABC sitcom, as part of the nation’s month-long recognition of the contributions Asian Pacific Americans have made to the country.

Other events by neighborhood councils in the past have included community festivals, creations of community gardens and holiday toy giveaways.

It’s been three years since Mid City West relegated businesses as second class citizens in their “re-organization” of the board. Businesses drive the community by paying taxes and providing jobs. Mid-City West has ignored the business community and it’s time to make this neighborhood council relevant again.