Organizers of past marches unite around common opposition 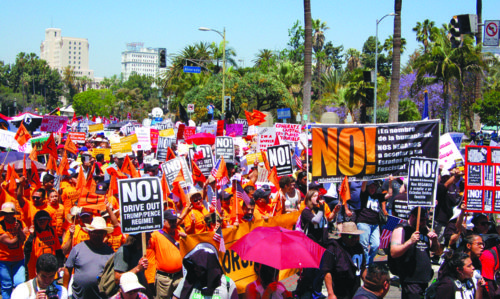 Demonstrators gathered near MacArthur Park before marching to City Hall on Monday to express opposition to new policies from the White House.
(photo by Gregory Cornfield)

Thousands of Angelenos marched from MacArthur Park to City Hall on Monday for the annual May Day rally for worker’s rights. But this year’s “Resist” march was as much about opposition to Trump’s policies as it was about advocating for the equal treatment of immigrant laborers.

Traditionally celebrated as International Workers’ Day, or a “Day Without an Immigrant,” May Day grew in popularity in Los Angeles as a way to highlight the contributions immigrants – who make up a significant portion of the workforce – make in the United States. Over the years in Los Angeles, it has become a day to protest proposed anti-immigration laws, government raids or voter registration restrictions.

But as Trump continues to push anti-immigration policies at a faster rate than seen in recent years – which includes intensified immigration enforcement, plans for a border wall, a ban on refugees from Muslim countries and threats to withhold federal funding from “sanctuary” cities and states – advocates of other issues joined an event traditionally reserved for labor rights.

“In light of President Trump’s cruel, ill-intentioned and disruptive policies that attack working people, immigrants, public education, Muslims and the LGBT community, we all recognize that the time to resist is now,” said Nordykian Araskya, an Armenian DACA recipient.

For the first time in nearly a decade, all marches happening on May Day announced unity among the groups.

“We are promoting our vibrant and diverse communities, and sending a message to the administration that we are united,” the May Day Coalition said in a press release.

“We are building solidarity across differences and uniting in our resistance,” said David Huerta, president of SEIU United Service Workers West.

“The LGBTQ community supports labor, immigrant and racial justice because those issues affect us too,” Gutiérrez said.

John Parker, member of the Workers World Party and on behalf of the May Day General Strike Coalition, said Trump’s policies ­– which he said are aimed at immigrants, women, the LGBTQ community, Muslims and minorities targeted by ICE and the police – are part of a larger attack against all working people. Angelica Salas, executive director of Coalition for Humane Immigrant Rights of Los Angeles, said the nation is “at a crossroads.”

“We are living in a moment when we should be asking of ourselves, what kind of country do we want to have? Most Americans are concerned their freedoms and liberties, even their well-being, health, education and air we breathe, is threatened under this administration,” Salas said. “We are joining today in resistance and every day after this as long as it takes to bring balance to the body politic.”

“There are approximately 267,000 LGBT undocumented immigrants in America,” he said. Mayor Eric Garcetti said the demonstrators stand together to send a message that Los Angeles will stand up “against any attempt to scapegoat immigrants, break up families and create a climate of fear that unsettles our communities and disrupts our economy.”

“We are L.A. We are a city, when we look out into a crowd and that crowd is not diverse, we know something is wrong,” Wesson said. “We are L.A. and we have a responsibility to protect and save this country.”