Three local organizations filed a motion in Los Angeles County Superior Court on May 1 to intervene in a lawsuit that has resulted in the closure of a popular Hollywood Sign access point.

City officials announced in March that a popular route commonly used by hikers that begins near Beachwood Drive would close on April 18. The decision was a result of a lawsuit filed against the city by Sunset Ranch Hollywood Stables. 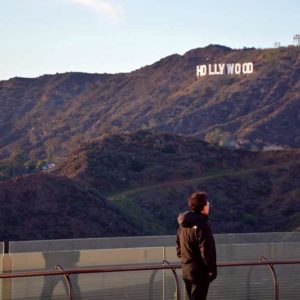 Three local groups are challenging a ruling that closed an opening to a popular trail with access to some of the best views of the Hollywood Sign.
(photo by Patricia Sanchez)

The property occupied by the ranch had a right-of-way agreement from 1940. Earlier this year, the court ruled that the right of way did not give Sunset Ranch exclusive usage of land adjacent to the trailhead. But it also ruled that the city “unreasonably and unduly interfered” with the land by increasing pedestrian traffic and having city officials turn away Sunset Ranch customers.

Representatives from the groups that filed the motion ­– Friends of Griffith Park, Griffith J. Griffith Charitable Trust and Los Feliz Oaks Homeowners Association – said they want the city to maintain public access at the Beachwood entrance.

“The hope is that we gain standing in the case so we can have some say and find a way that we can continue public access,” said Gerry Hans, vice president of science and conservation for the nonprofit Friends of Griffith Park.

Following a preliminary injunction order from the court, the city agreed to a stipulation that ordered the permanent closure of pedestrian access from Beachwood Canyon.

The Beachwood entrance has been used by hikers since the 1920s, according to the Friends of Griffith Park. The three organizations participated in the motion to restore access to the Beachwood entrance. It also alleges improper transfer of public land to a private party.

According to the complaint, the Griffith J. Griffith Charitable Trust fought the city in the past over usage of Western Avenue as an access point when the park expanded west, and over an attempt by city officials to charge a fee for vehicles entering the park.

“A basic right of Angelenos is access to its public parks,” said Clare Darden, trustee for Griffith J. Griffith Charitable Trust Fund, in a statement. “Any access threatened by special interest groups to Griffith Park land is a violation of Colonel Griffith’s declaration that the park be free and open to all.”

Members of the Los Feliz Oaks Homeowners Association have to use access points that are farther away from the more convenient Beachwood entrance, according to the motion. It also alleges other adverse effects on the community.

“As a result of the closure of the Beachwood Canyon entrance to Griffith Park, the city has redirected traffic through Oaks’ jurisdiction, severely affecting the environmental quality in the area,” the motion alleges.

A spokesman for Councilman David Ryu, 4th District, did not respond to a request for comment. Following the March announcement that the Beachwood Drive entrance would close, Ryu said that since “the Sunset Ranch litigation is done,” his office would be able to “move forward on long-term strategies to create better experiences” for tourists and the surrounding community.

Sunset Ranch and the city’s Department of Recreation and Parks did not respond to a request for comment.

A spokesman for Mayor Eric Garcetti said the mayor’s office could not comment on the case because it is still ongoing.

The motion is scheduled for a hearing on June 13.