Tensions from the tightly contested 2016 Democratic Primary race, which left in its wake a philosophical discord over the direction of the party, persisted through the California Democratic Party Convention in Sacramento last weekend. 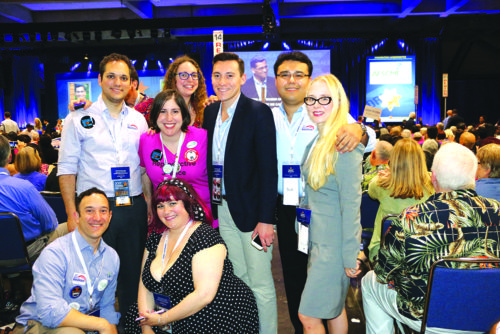 Los Angeles County Democratic Party Chairman Eric Bauman narrowly won an election for the state party’s chairman position. But overshadowing his victory were protests by groups of Bernie Sanders supporters following the defeat of Kimberly Ellis, their preferred candidate, and Ellis’ call for an audit of the ballots after she refused to concede.

All three voted for Bauman, citing his experience addressing the state’s issues, history as a Democrat and ability to galvanize grassroots supporters among his qualifications for the position.

“We can’t continue to fight each other,” said Montemayor, who also serves as communication director for Los Angeles Councilman David Ryu, 4th District.

As a supporter of Clinton’s 2008 campaign, Montemayor said he can empathize with Sanders supporters as they cope with the senator’s defeat – similar to the prolonged reconciliation period between former Secretary of State Hillary Clinton and then-Sen. Barack Obama supporters following their heated primary race. As a Clinton delegate at the Democratic National Convention, Montemayor also said he recognizes the need to form a united front against President Donald J. Trump and a Republican Party that has yet to gain favor with the majority of immigrants, LGBTQ citizens and other segments of the population.

Even though many Sanders supporters rallied behind Ellis, she, like Bauman, supported Clinton in the 2016 election. They each received support from notable Sanders and Clinton voters, underscoring the similarities between the two, said Horvath, adding that the Clinton-versus-Sanders narrative “isn’t accurate and needs to stop.”

Bauman’s advocacy of single-payer health care, a core issue among the Sanders camp, undermines the assertion by some of the so-called “Berniecrats” that he was merely a Clinton proxy.

“Also, Ellis wanted to redefine the party, citing increased independent voter registration numbers,” said Horvath, who also served as a Clinton delegate last summer. “Bauman is proud of who Democrats are and what we stand for, but thought we needed to be more passionate about our values and on the issues for working people and middle class families.

“California Democrats have a real opportunity to be leading the country’s Democrats in opposing the current administration,” she continued.

Stromberg called parts of the convention “negative” and “combative.”

“It could’ve been a great opportunity to unite the party,” she said. “Instead, this process further divided the party.

“We have so many greater battles to fight.”

While Ellis and state party officials began auditing the votes at 9 a.m. on May 23, Bauman said he wants to go “all in” to help Democrats reclaim majorities in the House and Senate for the first time since January 2011.

“The Trump budget blasts holes in California’s safety net and state budget, and I am confident Democrats in our Congressional delegation will fight to block this budget and work to pass one which reflects the values of the American people,” he said.

Why did the museum cross the road?