Hundreds of Angelenos gathered at Friendship Hall in Los Feliz on Monday for a town hall meeting with Congressman Adam Schiff, who spoke about the investigation launched more than two months ago into Russian interference in the 2016 election.

As the ranking member of the House of Representatives’ Permanent Select Committee on Intelligence, Schiff has become a major player in the drama that has unfolded in the aftermath of President Donald J. Trump’s victory in November. And as a leader of the Democratic Party, Schiff has also taken an active role in checking the president, often correcting Trump on Twitter or criticizi 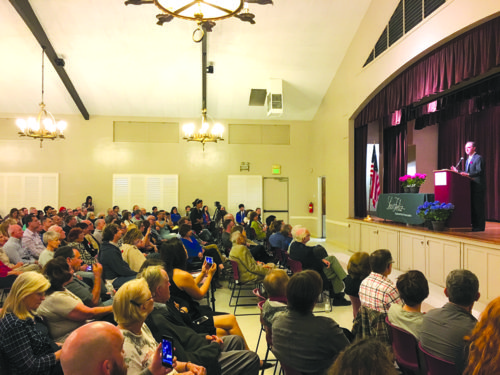 ng his policies on national television.

“[Schiff] has been my personal hero,” said City Councilman David Ryu, 4th District. “He has been the steady hand amongst all the chaos and turmoil and name calling and the reality TV that unfortunately is the news today. … He exudes what a public servant should be.”

Schiff discussed the Russian hacking and leaking of emails of former Secretary of State Hillary Clinton and her staff. He said foreign countries have attempted to hack elections and candidates before, but this instance was different because it was “in a sense, weaponized” in order to undermine the candidacy of Clinton and advance Trump.

But Schiff stressed the importance of the Congressional investigations, and downplayed the narrative that they were launched in an attempt to make up for a lost election. He warned that the nation’s intelligence agencies concluded that Russia will attempt to interfere with U.S. elections again, and he fears that their efforts could become more sophisticated or more consequential.

“So it’s vital that we understand just what they did, just how they did it, and that we prepare ourselves, defend ourselves as best we can in the future,” Schiff said.

But the Democratic Party and former President Barack Obama’s administration also share the blame, Schiff said, for the way the information was handled. Before the election, Schiff and Sen. Dianne Feinstein (D-CA) issued a statement explaining they were convinced Russia was responsible for the hack and that the decisions were made at the highest levels of Russian government.

“The reason we had to do that was because we couldn’t persuade the (Obama) Administration to make the attribution itself,” Schiff explained. “Why is that? Why, during a presidential election of enormous consequence when you have a foreign adversarial power interfering in our election, would our administration not come out as soon as it learned and not tell the American people it was meddling in its affairs?”

Schiff explained two possibilities – the first is that the Obama Administration was too careful to avoid doing anything that would make it appear it was putting its “hand on the scale” in favor of Clinton. But more so, Schiff surmised that Trump’s rhetoric played a role in causing Obama to balk at sounding the alarm on Russian involvement because it could have in some way validated Trump’s claims that the election was “rigged.”

Indeed, less than a month ago, Trump said, “you’ve been hearing me say it’s a rigged system, but now I don’t say it anymore because I won, OK. It’s true. You know, now I don’t care. I don’t care.” 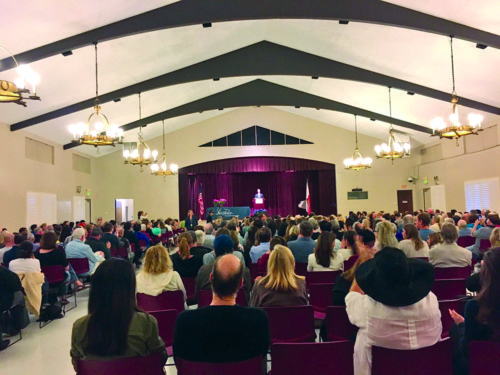 Congressman Schiff discussed his role in the Congressional investigation into interference of the 2016 election.

Schiff wanted to inform the country before voters went to the polls in November. The Obama Administration eventually did attribute the hack to Russia after Schiff’s and Feinstein’s statement, but the administration didn’t do anything more. Schiff urged the administration at the time to begin discussion with allies to enact a new round of sanctions on Russia, to both punish them for interfering, but also to signal to the American people that the government was not going to stand for interference.

Moving forward in the investigation, Schiff said they will find whatever they can and share it with the public.

“One of the issues is that we know the Russians in Europe use financial entanglement to influence policy,” Schiff said. “They like dealing with business people because they can hook them with a financial transaction and then they can reel them in. So we need to determine if that is a tactic that was used here, and on what U.S. persons was it used.”

Schiff said Congress should establish a special commission that would have the added benefit of a larger staff, whereas the current congressional investigations are conducted by lawmakers with only their existing staff.

“Our day job is oversight of all the intelligence agencies,” Schiff said. “And those agencies for the most part are pretty good at keeping secrets. And we have to oversee them to make sure they are acting lawfully, that they are talking to each other in ways that we need them to to protect the country. … We have to know what the right questions are for vigorous oversight all the time. That’s the day job and that hasn’t gone away. We just now have this huge investigation on top of it.”

Schiff said the hardest question to answer is how much longer the investigation will take.

“I don’t know,” he said. “Certainly there is a sense of urgency. But, of course, if we don’t do a thorough job, we’re going to add little value, if at all. But the other thing I would say about the investigation is if we can’t somehow find a way to do this together, to reach a common conclusion among Democrats and Republicans, we will also add little value at the end of the day.

The 2016 election, its aftermath, and the investigations have pointed to larger issues for the country moving forward in Schiff’s perspective, as it becomes more evident that the electorate is more divided than ever in a time when voters think anything bad for their opponent is good for them.

“A lot of the damage that was done during the election was done to ourselves, by ourselves,” Schiff said. “Herein, I think, lies the most important question of the investigation: What can we do to prevent this in the future? … We have to be concerned not just with what they did already, but that they go beyond what they have already done and that we are in the new “wild west” when it comes to the democracy process. … It’s true the GOP were willing to accept Russian interference. It’s also true that Democrats failed to persuade the country why they should care. …That was our obligation and we didn’t meet that challenge.”

He said it has shed light on a challenge for lawmakers moving forward to go into communities affected by the “global world where automation is replacing a lot of the jobs that our fathers and mothers had.” He said they should focus on one basic question: “What are you offering us that will give us some hope that our lives and our children’s’ lives will be better?”

“I would much rather we spent the next year and a half figuring out the good answer to that question than spend our time talking about message,” Schiff said.

“That’s really our only defense – understanding what they did, preparing ourselves that it may happen again, and somehow, developing a consensus that whether it helps one candidate or hurts the other, or helps one party and hurts the other, that all Americans will reject it. That’s the only thing that’s going to protect us.”

In the broader context, Schiff said America is engaged in a new ideological struggle.

“It’s not communism vs. capitalism. But it is authoritarianism and autocracy vs. democracy and representative government. And the leader of the autocratic movement is Vladmir Putin,” he said. “And this is really what we’re up against. I don’t think it’s an exaggeration to say that the fate of liberal democracy is really at stake here. For many of you who are a part of the same generation I am, who grew up in the wake of World War II, we grew up to think that our democracy was on such a solid footing, that it was in a way self-effectuated, that we didn’t have to really be as vigilant as we should have been. That was our mistake.”

He continued, “What I’ve come to find in just the last few months is that our democracy, in the hands of the wrong person in the Oval Office, it is really quite fragile. There are certain, very basic qualities that we need in a president to make our system work. We need someone who understands and respects the separation of powers. We need someone who understands and respects the free press. And we need someone with a very basic level of simple decency. When we don’t have that, we find out just how much damage you can do to our democracy, even operating within the letter of the law.”

Schiff finished with a story about a dinner he had in Munich, Germany with Sen. John McCain, Bill Gates and Bono, who Schiff said “speaks like a poet.”

“Bono said, ‘I’m very proud to be Irish. I’m very proud of Ireland, but Ireland is just a country.’ Most countries, he said, are just countries, but America is also an idea. And when he said it, it really struck me, that this is what’s at risk right now – the very idea of America. And of course, it’s that idea that people fought and died for that we memorialize today. It’s that idea. And that’s an idea we need to cherish.”