May is National Bike Month, an annual opportunity for communities to celebrate bicycling.

The Los Angeles Department of Transportation (LADOT) has teamed up with the California Office of Traffic Safety (OTS) and community partners to celebrate Bike Month by working to make the city of Los Angeles a safer place for people biking and walking. 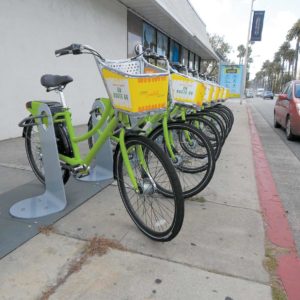 West Hollywood’s “WeHo Pedals” program offers bike sharing. Riders can find bicycles at stations throughout the city, including this one at Santa Monica Boulevard and Doheny Drive.
(photo by Edwin Folven)

Today, May 18, is Bike to Work Day in the city of Los Angeles. To encourage the healthy method of commuting, LADOT will offer free rides to bicyclists who use DASH and Commuter Express bus services, or Metro buses and trains. Any rider who either brings a bicycle or wears a bicycle helmet will be given a free ride on DASH or Commuter Express buses. For those Commuter Express riders who bring a bicycle, all Commuter Express buses are outfitted with bike racks on the front of the bus. Each rack accommodates three bikes, so riders bringing their bikes will be accommodated on a first-come, first-serve basis. For DASH riders, DASH buses have two position bike racks on the front of the bus. However, any rider who boards any DASH bus wearing a bicycle helmet or carrying a folding bike will get a free ride.

West Hollywood is also celebrating Bike Month, as well as the recent launch of its shared bicycle system. The city of West Hollywood will host a pit stop for Bike to Work Day on May 18 with the WeHo Bike Coalition and Bikes and Bikes LA in the sidewalk plaza at 8743 Santa Monica Blvd., east of Hancock Avenue. Cyclists will enjoy coffee, snacks and giveaways during their morning commute stop-off from 7:30 to 10 a.m. For information, call (323)848-6868.

Under the city’s Vision Zero initiative, the agencies will also host eight creative traffic safety education campaigns to promote road safety. The campaigns aim to engage the public in conversations about traffic safety.

Throughout May, bike advocates come together for bicycle caravans, trainings, “Bike to Work Day,” and fix-it workshops. Participants also use the month to advocate for bicycle infrastructure and commemorate friends and family lost in crashes. It is an opportunity to strengthen the bicycle community, 13talk about and practice bicycle safety, and celebrate the form of transportation.

OTS shares Vision Zero’s goal of zero traffic deaths in Los Angeles. The community-based education campaigns come in advance of safety improvements coming this summer to 95 miles of the High Injury Network. These parallel efforts are aimed at meeting Vision Zero LA’s first major benchmark goal: a 20-percent reduction in traffic fatalities by the end of 2017.

For information about Vision Zero and its traffic safety campaigns, visit: visionzero.la-city.org/actions/. For information on LADOT’s support for the use of bicycles, visit us at http://bike.lacity.org. For DASH or Commuter Express bus routes in your area, visit ladottransit.com or call the LADOT Customer Service Center at (323)808-2273.

Beverly Hills contests are as easy as pie