‘Alien: Covenant’ is the first letdown of summer

When “Prometheus” premiered, the connection to “Alien” was unclear, a liberating move for franchise film.

As soon as Fox announced the sequel would clearly be an “Alien” film, trouble was nigh. Replacing brains with gore and scares, a more thoughtful prequel franchise quickly transformed into “Alien: Covenant,” an installment as memorable as “Alien 3” and “Resurrection.” What a waste.

It’s hardly shocking considering director Ridley Scott’s uneven track record over the last 15 years. But “Prometheus,” regardless of its failings, set up such a fascinating next chapter. But that’s not what audiences want, pesky Fox execs complained. So here we are with regurgitation replacing inspiration.

Sure, we get a few answers, learn a little more about how the Xenomorph came to be (in fact we get the entire backstory, a revelation none of us needed), but the answers aren’t satisfying. The mystique of the original films is far more compelling. 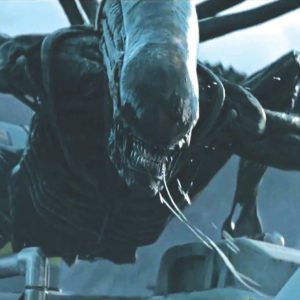 The Xenomorph is back.
(The photo courtesy of 20th Century Fox Pictures)

Let’s get some (yawn) plot points out of the way. In a cinematic coincidence that rivals the best in film history, the crew of the Covenant pick up a transmission where no human should be following an unexpected space flare. So they check it out, of course, uncovering an alien vessel, the same one Dr. Elizabeth Shaw (Noomi Rapace) and robot David (Michael Fassbender) fly off in at the end of “Prometheus.”

We learn much about the survivors of the Prometheus, but an unknown pathogen and a couple sick crew members put exploration and investigation on pause. As things go wrong, the Covenant’s crew must try to escape the planet while that hungry creature with a wicked tail, mouth within a mouth and acid for blood evolves and closes in.

For those willing to suspend expectations, “Prometheus” was a fascinating film, a prequel loosed from the horror-thriller roots of the previous “Alien” films. In place of a creature on the loose, a deep space expedition confronted a virus and a very angry alien species, the Engineers, with an inexplicable disdain for humanity. Everything concludes with the promise of answers and a richer story ready to delve deep into theological questions about human existence.

Then “Covenant” craps all over that. “Prometheus” had its flaws, but its very, very loose sequel removes all the promise of this “Alien” reboot. Once David was a subtle character, a robot whose intentions remained a mystery. Now, he’s over the top, a caricature who’s infuriatingly predictable. As for Rapace’s Elizabeth Shaw: nowhere to be seen.

She appears in some promo footage, but her storyline is written off without any screen time. What an insult. The best character this franchise has seen since Ripley and she vanishes with throw-away dialogue – insulting and a foolish move.

As an “Alien” film, “Covenant” is entertaining enough. But 1979’s “Alien” and 1986’s “Aliens” remain untouchable, two perfectly complementary films. Nothing ever came close, and this film is an irritating reminder: a two-hour middle finger to anyone hoping for originality in a franchise that set a standard, at least at first, for building upon and thwarting expectants. “Alien” was a claustrophobic horror film. “Aliens” was an action thriller. Ignore most of the others. Then “Prometheus” was an introspective science fiction film about exploration.

So what’s “Alien: Covenant?” Nothing new. It tries to resolve issues from “Prometheus” while plagiarizing a slew of plot points from “Alien,” shamelessly so. It normalizes the many sins of “Alien 3,” that horrific dismissal of beloved characters and the resolution established in the previous film. What a tragedy considering how pretty “Covenant” is. And the Xenomorph, still played by a dude in a very elaborate costume, has never looked better.

If you want a good scare, “Alien: Covenant” delivers some suspenseful moments, though calling it a horror film is a stretch. But if you’re invested in this story, it’s a letdown, a trip through well-traversed territory where no cliché goes unturned.

And just wait. If it earns enough at the box office, we’re destined to witness numerous iterations of the same story while never seeing anything new, bound to poach the original for an eternity in space, where no one can hear us screaming a better idea.

Very good and correct description of a trash movie… Writer is courageous.. I too liked Prometheus a lot better than alien covenant. Elizabeth Shaw was memorable and likeable. Her role should not have been cut short… Alien covenant shows what happens when commercial interest become more important than creativity.