How many supervisors does it take to run the county?

Proposed amendment would increase number of L.A. board members, and require elected executive

When Los Angeles County Supervisor Sheila Kuehl, 3rd District, addressed the Hollywood Chamber of Commerce in 2015, she referred to her job as one of the nation’s most powerful positions in local government.

“This is like when people say, in the order of power, you have the president, governors, and the L.A. County Board of Supervisors, and I don’t think it’s a joke,” Kuehl said. “Because the truth is, I can wake up in the morning and think of something I’d like to do about homelessness – maybe I’d like us to put in $200 million in the next year and a half – and I only need two votes.”

Kuehl represents approximately 2 million county residents as one member of a five-member board that approved a budget of nearly $30 billion last year. 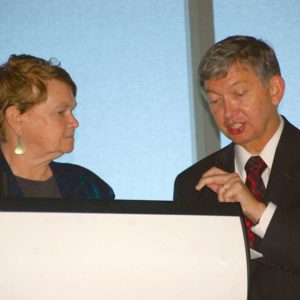 Supervisor Sheila Kuehl, left, answers questions in 2015 with Leron Gubler, president and CEO of the Hollywood Chamber of Commerce.
(photo by Gregory Cornfield)

But now State Senator Tony Mendoza (D-Artesia) is restarting his effort to make big county governments “more representative,” accessible and accountable to the populations they serve. Earlier this year he introduced Senate Constitutional Amendment (SCA) 12 to expand representation on county boards that represent more than five million people. More than twice as many people live in Los Angeles County. If the amendment passes the Legislature and is approved by voters in 2018, the size of the Los Angeles County Board of Supervisors would increase from 5 to 7. It would also require the creation of an Elected County Executive.

“Accountability and transparency are critical to the functioning of government, be it at the state, local or federal levels,” Mendoza said. “It has been over 150 years since the county system of government was introduced. California, especially Southern California, has changed so dramatically and it is imperative to adjust how a board of supervisors is structured for large, urban counties.”

SCA 12, pending passage through the Legislature, would be scheduled for voter consideration during the June 5, 2018 Primary Election.

Using data from the 2020 U.S. Census, the amendment would change the number of seats on county boards by limiting the population of a single supervisorial district to no more than twice the population size of a congressional district, which currently averages to approximately 1.4 million residents per district. SCA 12 also contains language to control expenses and lays out the powers of the Elected County Executive and establishes new term limit guidelines.

“If Los Angeles County were a state it would be the eighth largest. I believe L.A. County is too large and should split up,” said co-author Senator Scott Wilk (D-Antelope Valley).

Kuehl, however, said she strongly opposes the amendment.

“It is inappropriate from any point of view to allow the voters from 57 other counties to dictate the governance structure of our county,” she said. “No other local jurisdiction is so cynically singled out. It’s hard for me to believe that elected representatives in Kern, Contra Costa, Alameda, San Bernadino, San Diego and other counties would welcome the specter of Angelenos removing their right to local self-determination. Nor do I imagine that voters in Northern California should have the right to vote on a constitutional amendment to change the governance structure of a county hundreds of miles to the south. As someone who spent 14 years as a legislator in Sacramento, I know the magnitude a proposal to amend the California constitution should have. This kind of personal cherry-picking represents an extraordinary state overreach.”

In a statement released this week, Kuehl explained voters in Los Angeles County already have the ability to expand the membership of the board of supervisors or establish an elected county Chief Executive Officer by amending the County Charter through a local ballot measure.

“Since 1962, Los Angeles County voters have had four opportunities to expand the board and each time voters have overwhelmingly rejected such proposals,” Kuehl said.

Mendoza also made an attempt at the same amendment in 2015, but failed.

Kuehl also said the proposal for an elected CEO would “deeply politicize” the administrative and ministerial work of county government.

“Finally, it’s suspicious that centrists in the Legislature want to water down a progressive board. Or perhaps there are just too many women?” Kuehl said. “All the authors of this wrong-headed bill are men except for one woman from Stockton. I’m just saying.”

Mendoza is a Los Angeles native and former elementary school teacher in East L.A. He represents the 32nd Senate District, which includes Los Angeles and portions of Orange County.

Former County Supervisor Zev Yaroslavky has advocated for an elected executive for the county for years, to give the county government someone to be accountable. With the existing structure, each board member can blame another for inaction or poor performance. He has not taken a position on Mendoza’s amendment, but he pointed to the closure of the Martin Luther King Hospital, an issue he said “festered for 30 years.”

“No Elected County Executive would have allowed it to fester for so long,” he said.

To put it into perspective, on Wednesday, he pointed out that if Los Angeles County were to become its own state, it would be the eighth largest state in the country.

“No state government is run by a committee or board of five people,” he said. “I was always fond of saying if we think the county’s system is so perfect, why don’t we go to Michigan – the ninth largest state – and recommend they get rid of their governor and Legislator. How long before they show us the door? It doesn’t make sense in a lot of ways. It’s awkward.”

But he also said there is something awkward about asking the people outside of Los Angeles County to make a decision about how Los Angeles County should be governed. Like Kuehl, he said local counties have the ability to alter their governing system in isolation without the state government. But he said without an amendment like Mendoza’s, the changes might never happen.

“I don’t think you will ever find a board that will initiate a county ballot measure or resident campaign,” he said.

Yaroslavky is also supportive of expanding representation, but not without an executive, as seven supervisors could slow the process down more than five. But he said it’s an important debate to have, especially in dealing with the largest local budget in the country outside of New York City.

Heilman sworn in as WeHo’s Mayor