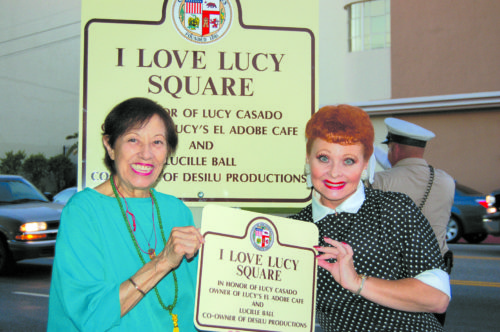 Lucy Casado, owner of Lucy’s El Adobe Cafe on Melrose Avenue, was shown with a Lucille Ball impersonator at a ceremony in 2007 to dedicate “I Love Lucy Square.” The intersection of Melrose Avenue and Plymouth Boulevard was named after the two famous Lucys – Casado, who owned the restaurant, and Ball, who filmed her famous television show across the street at Desilu Studios.
(photo by Edwin Folven)

Her restaurant’s family-oriented atmosphere and authentic Mexican cuisine have attracted Angelenos from across the city for generations. The Melrose Avenue eatery was also frequented by politicians including city councilmen, senators, governors, vice presidents and presidents.

“It just was one of the greatest places in the neighborhood where families from the community, and also others, came to enjoy and grow up in Lucy’s El Adobe,” former Councilman Tom LaBonge, 4th District, said during an adjourning motion honoring Casado at Tuesday’s city council meeting.

“She went straight to heaven, no TSA check, right through [to] the top of the line,” LaBonge continued. “St. Peter said, ‘come on in, Lucy,’ and she’s in the arms of Frank Casado,” who died in 1990.

LaBonge added in a phone interview that there was “nobody in the world like Lucy Casado.”

“She saw every child grow up in this area in the last 45 years,” he said.

Councilman David Ryu, 4th District, said Casado was a “pillar in the community in Larchmont Village as well as a pillar in politics.”

The wall of fame inside the restaurant serves as a testament of Lucy’s wide network of friends and patrons. In addition to the numerous politicians she’s served, the wall is adorned with photos of musicians and other artists. Sometimes those two worlds merged at Lucy’s, such as when Gov. Jerry Brown met singer Linda Ronstadt, his former girlfriend, at the restaurant in the 1970s.

Frank was one of the founders of the Mexican American Political Association, and regularly held meetings with Mexican American activists and politicians, according to a 1990 obituary in the Los Angeles Times. Lucy’s hosted a wide array of community events, from political rallies to Loyola Marymount University alumni association gatherings.

Alison Martino, founder of the Vintage Los Angeles Facebook page, said Casado was “the sweetest, most down to earth” person, “always wanting to know about her customers.”

“Being in business that long, she never forgot a face, or a name or a favorite booth,” Martino said. “She treated everybody exactly the same.”

Casado, who was born in El Paso, Texas is survived by her two sons and daughter.

Services will be held at St. Victor’s Church in West Hollywood on May 19 and 20.

'King of the Sunset Strip,' Mario Maglieri dies at 93