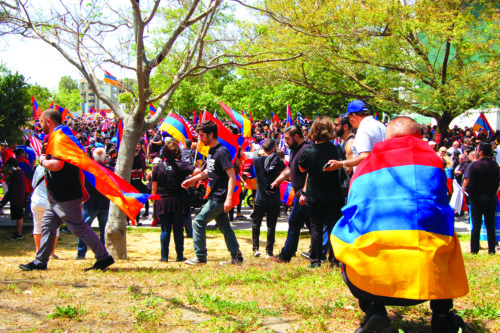 With the Armenian flag draped around him, a man crouches down and observes the scene at Pan Pacific Park on Monday.
(photo by Gregory Cornfield)

The annual march in Los Angeles for recognition of the 1915 Armenian Genocide is about awareness and appreciation for the 1.5 million lives that were taken by the Ottoman Turkish Empire. But as a growing tradition – consisting heavily of family members getting together to ensure their origins are not forgotten – it also is a yearly symbol that an attempt to exterminate their race and culture failed.

Thousands marched on Monday to honor their ancestors and continue the effort for widespread recognition of the genocide. With members of every generation represented, the annual demonstration in Los Angeles is the nation’s largest Armenian march for justice.

Throughout the day on Monday – at Hollywood Boulevard in the morning, and in Pan Pacific Park in the afternoon – parents explained to their children the meaning and history behind the event. Toddlers, students, adults and seniors – many of whom are in America because of the 1915 genocide – wore black shirts in solidarity for those who were killed, and waved red, blue and yellow Armenian flags with pride.

Los Angeles resident Reynold Khachatourian walked with his children among the sea of demonstrators in the march to the Turkish Consulate on Wilshire Boulevard.

“We’re 102 years removed from the systematic attempt to destroy Armenians, Greeks and Syrians from the Ottoman Turkish Empire. And the further you get away from a genocidal event the more important it is to pass that tribal knowledge on down to other generations,” Khachatourian said. “So we bring our children because we want to instill in them, not only the memory of fallen ancestors, but the duty and dedication they need to show to keep a vibrant, thriving population, to show that genocide doesn’t work.”

Between 1915 and 1923, Armenians were subjected to torture, starvation, mass murder and exile, but the government of Turkey and many factions around the world do not recognize the events as a genocide, or they do not recognize the events happened at all. In response, communities around the world commemorate Armenian Genocide Remembrance Day on April 24.

But while the tradition of marching continues to help bring families together, frustration persists as the effort for wider recognition is far from over.

To avoid testing relations with the government of Turkey, an ally, the United States government has not recognized the 1.5 million deaths as a “genocide.” In a statement released by the White House on Monday, President Donald J. Trump recognized Armenian Remembrance Day, and he mentioned “one of the worst mass atrocities of the 20th century” in the final years of the Ottoman Empire. But the statement did not reference “genocide.”

“As we reflect on this dark chapter of human history, we also recognize the resilience of the Armenian people. Many built new lives in the United States and made indelible contributions to our country, while cherishing memories of the historic homeland in which their ancestors established one of the great civilizations of antiquity,” the statement read. “We must remember atrocities to prevent them from occurring again. We welcome the efforts of Turks and Armenians to acknowledge and reckon with painful history, which is a critical step toward building a foundation for a more just and tolerant future.”

The Turkish Consulate referred to Trump’s statement as “misinformation” about the “1915 events,” which derived from “the information pollution created over the years by some Armenian circles in the U.S. by means of propaganda methods.”

“Today, we received another disappointing statement from yet another president, refusing to acknowledge the murder of 1.5 million Armenians from 1915-1923 for what it was – a genocide,” Schiff said on Monday. “President Trump now joins a long line of both Republican and Democratic presidents unwilling to confront Turkey, and by refusing to do so, he has made the United States once again a party to its campaign of denial. How can we speak with the moral clarity we must about the genocidal campaign by ISIS against religious minorities in Syria and Iraq, if we are unwilling to condemn the first genocide of the last century?”

In a letter to then-President Obama in 2016, Schiff explained that recognition of the atrocity as a “genocide” is a promise to survivors and ancestors that the world will not forget.

“Remaining silent in an effort to curry favor with Turkey is as morally indefensible as it will be ineffectual,” Schiff wrote.

Many other leaders in the state of California also recognize the genocide. Gov. Jerry Brown on Monday issued a proclamation declaring April 24 as “A Day of Remembrance of the Armenian Genocide” in California. Lt. Gov. Gavin Newsom, former Mayor Antonio Villaraigosa, Councilman David Ryu, 4th District, and LAUSD board president Steve Zimmer were among the leaders of the march to the Turkish Consulate.

Mayor Garcetti said he stands with the survivors of the genocide.

“We stand together in our conviction that the horrible wound opened in 1915 can only be healed through full and unqualified acknowledgement of the truth,” Garcetti said. “[The] commemoration is about more than remembering one of the lowest moments in world history. It is a time to reflect on and admire the strength and perseverance of the Armenian people – who for more than a century have inspired people everywhere by insisting on proper recognition, refusing to let their story be minimized, and demanding that their ancestors never be forgotten.”

Khachatourian, the father marching at Pan Pacific Park, said their job is to continue to voice that a genocide took place, “that it’s not up for debate, it’s a historical fact.”

“We’re here to prove that we’re going to keep fighting until that recognition takes place, until we don’t have to keep talking about it as a ‘debate,’” he said. “It’s a false equivalency to call it a ‘contentious issue.’ It’s not. It’s a matter of historical fact. That’s what we’re here to march for.”

He said marching is not an act of aggression, but one of defiant optimism.

“We’re Armenian-Americans. That’s very important to understand. My children were born here. We’re not here (marching) as a xenophobic statement at all,” he said.

“This is to say we’re part of this community, this culture. Especially in L.A, in a melting pot like this, we need to know about each other and support each other against all genocidal acts, and that’s what this is. You take your revenge by thriving and by surviving.”

Thank you Gregory, great article but Armenian flag colors are red blue and orange not yellow