On Tuesday, April 25, the Los Angeles Superior Court ruled in favor of the Los Angeles Conservancy in its public interest lawsuit to stop the demolition of the Lytton Savings building, which is now Chase Bank. 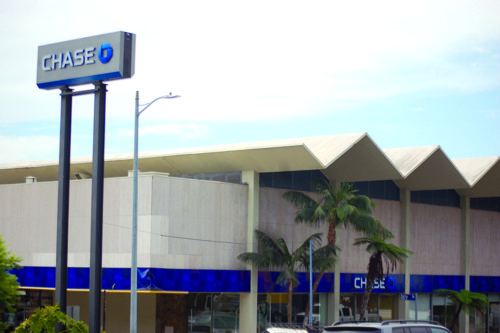 Now a designated historic-cultural monument, the 1960 building at 8150 Sunset Blvd. was proposed for demolition as part of a mixed-use development designed by Frank Gehry.

Linda Dishman, the Conservancy’s president and CEO, said in a statement that the group is excited Gehry’s project can move forward by incorporating the Lytton Savings building. Adrian Scott Fine, the Conservancy’s director of advocacy, said the group has worked with many architects and developers to successfully integrate historic places into new development.

“And now that can happen here,” he said in a statement. “Blending old and new is the wave of the future in Los Angeles.”

The court’s ruling found that because the city’s approval of the Lytton Savings building’s demolition violated the California Environmental Quality Act (CEQA), the project approval must be set aside. Under CEQA, a project must avoid significant impacts such as the demolition of a historic resource if the fundamental project objectives can be met without demolition.

The environmental impact report (EIR) for the 8150 Sunset Boulevard project studied two alternatives that included the historic building and determined that they would feasibly accomplish the project. The city later claimed that the preservation alternatives were not feasible and approved the building’s demolition.

The Conservancy did not challenge the adequacy of the project EIR. Conservancy attorney Susan Brandt-Hawley said the City Council abused its discretion, and that the loss of the Lytton Savings building would be a “significant environmental impact.”