No room in WeHo for hotel moratorium

The West Hollywood City Council on Monday rejected a proposed development moratorium on its hotel industry – which provides more than a quarter of the city’s General Fund revenue. But in anticipation of an influx of hotel development in the next five years, the city will now require hotel developers to analyze alternative uses and provide market analysis when submitting projects for approval. 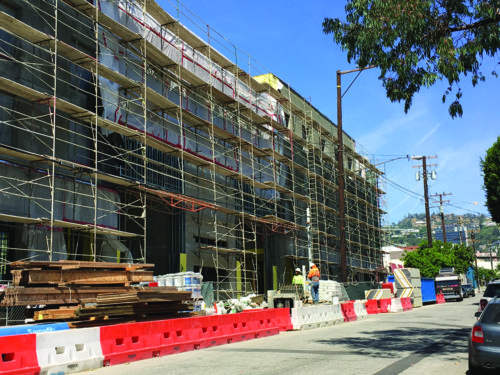 Hotel construction at 627 N. La Peer was listed in the city’s pipeline in analysis on the lodging market’s sustainability.
(photo by Gregory Cornfield)

Mayor Lauren Meister had recommended temporarily freezing new hotel approvals after independent studies concluded that the projected influx of hotel rooms – from recently approved and recently proposed projects – would “cannibalize the market” and reduce occupancy rates that would take years to rebound.

If existing proposals are approved, there are potentially 1,229 new hotel rooms entering West Hollywood’s market – equal to a 60-percent jump to the existing 2,060 room inventory. Meister proposed the moratorium to allow the city “to take a breath” so they can further research and discuss policy in regards to the hotel stock.

“I believe the council needs to look at the big picture and our future economic growth,” Meister said.

But the other council members said the proposal did not meet legal requirements for a moratorium, and that studies were based on insufficient analysis. They said they did not want to risk crippling the industry that the city depends on so heavily.

“Tourism has been the lifeblood of this community for 100 years,” Duran said. “Since the 1920s when prohibition passed, there was the establishment of casinos and nightclubs on the Sunset Strip, which gave this community its early version of a local economy. That economy expanded in the 1930s and ‘40s with the formation of the Rat Pack, which then created the Ciro’s, the Mocambo, the Trocadero. And tourism continued to be the lifeblood of this community through the 1940s and ‘50s during the World Wars and the Korean War. During the 1960s, the other side of Sunset developed with the rock ‘n’ roll clubs, the Whiskey A Go Go, the Rainbow Bar and Grill, the Roxy, and the Rock ‘n’ Roll Hyatt was created.”

He said the economic activity sustained because the community became a hub for local, national and international tourism.

“The Sunset Strip is one of the most recognizable avenues in the entire United States. It’s got folklore behind it. It’s a tourist destination that helps create, establish and fund our West Hollywood Visitors Bureau,” Duran said. “We are a city that has been heavily dependent on tourism for 100 years – long before any of us were ever here. So the question is whether we continue to play to our strengths, or attempt to thwart the one thing that has caused us to exist in the first place.”

Meister said the city should consider diversifying so they don’t put all their “eggs in one basket.”

“We need to look at this in terms of the bigger picture, with housing and transportation and resident employment,” she said. “Hotels are not providing jobs for our residents. Our residents who are working couldn’t afford to live here with the types of jobs provided by hotels.”

She added that with 80-90 percent of residents commuting out of the city for work, the city should consider amending policy to incentivize projects that would provide employment to West Hollywood residents.

Duran said TOT is “the most invincible part” of the city’s budget, and they shouldn’t consider weakening the local market.

“In my mind, I can do nothing that would in any way thwart or disrupt the most steady stream of tax revenue that we have,” he said.

The council members also noted that the proposal did not meet legal requirements to impose a moratorium, which can only be authorized if there is an immediate threat to public welfare.

“By implementing a moratorium, we’re taking tools off the table that the city wants to be able to use to protect things that are important to our community as a whole,” said Councilwoman Lindsey Horvath. “A moratorium is a mallet being used when I think we need a scalpel at this point. … I think we have other tools to address these concerns.”

The council members and speakers during public comment also said the proposal was based on inadequate analysis, which relied heavily on 2015 data. Meister pointed out that the independent study conducted by PKF Consulting did not examine branded hotels versus non-branded hotels, nor did it address short-term rental markets such as Airbnb. Notably, if TOT was paid on Airbnb rentals, city staff estimates West Hollywood would have received an additional $945,000 in 2014-15. And more recent data shows the number of available units on Airbnb jumped nearly 50 percent since then.

Meister’s proposal also pointed out that PKF’s study did not examine industry trends or political factors, such as how a national travel ban on six Muslim-majority countries might affect the lodging market. The analysis also did not include some newly proposed hotel projects, such as the Barney’s Beanery mixed use proposal, and two other mixed use projects, nor did it consider projects under construction in Beverly Hills or projects approved on West Hollywood’s border, such as 8150 Sunset.

“I find it remarkable that we are proposing a moratorium based on a report that you just said was inadequate,” said Genevieve Morrill, president and CEO of the West Hollywood Chamber of Commerce. “Shutting down approvals for new construction simply provides more opportunity for our competitors to build on our borders and does not address the issues of concern.”

West Hollywood’s occupancy rates for hotels this year is estimated at 86 percent, and July 2016 was the city’s best month ever for TOT revenue. PKF’s study, which intensified concerns, analyzed three hypothetical market scenarios with consideration to projects in the city’s “pipeline.” Anticipating that all existing proposals would be approved as they are now – in addition to recently approved projects – PKF projected occupancy would decline to 68 percent by 2020. The peer review, conducted by Atlas Hospitality Group, projected the decline would result in a $1-million decrease in transient occupancy tax (TOT) for the city in 2020-21. However, the city would still receive $36.8 million in TOT that year under that projection.

Keith Kaplin, chairman of the West Hollywood Chamber of Commerce, said he supports further study and more public discussion, but he said the chamber does not support a moratorium on hotels.

“I think moratoriums and bans are not things representative of progressive thinking, or of progressive activism,” Kaplin said. “I think they’re tools used when you want to push an agenda without engagement, without dialogue, without discussion, without homework. And while we do have some homework to do here, I think a lot of people have misconstrued which hotels would be impacted by this moratorium, and the very sorely needed amenities that some of these projects will be providing to the city.”

Councilman John D’Amico did not vote for the moratorium, but he advocated further study and urgency on the issue, and said he is not convinced that the city’s planning department and the city council have a direct understanding of where the city is headed with regard to the lodging market.

“Instead, we’re reacting more to the types of people that show up at our counter rather than putting out the kinds of direction we’d like to pursue,” he said.

Heilman agreed, and said he has long been frustrated that the city does not have sufficient meeting or banquet space. But he said he is hesitant to spend money on a study that could be obsolete before it can be used effectively to control the market.

City staff will research cost estimates for further market analysis. The city will establish a policy to require hotel developers to consider alternative uses when conducting environmental impact reviews. And developers will be required to fund a market study for the planning commission and city council on a per-project basis to ensure analysis reflects latest trends.