Near the end of its years-long effort to secure a preservation ordinance for the Miracle Mile, the neighborhood’s residential association discovered one of the homes in the community could potentially qualify for historic-cultural monument (HCM) status.

On May 4, the Los Angeles Cultural Heritage Commission will consider a nomination to designate 744 S. Ridgeley Drive as a HCM. The building was constructed in 1937 and designed by Edith Northman, the first female licensed architect in Los Angeles.

During the Miracle Mile Residential Association’s (MMRA) effort to establish protections for the neighborhood with a historic preservation overlay zone (HPOZ), the residential building on Ridgeley Drive was excluded from the boundaries. The MMRA and residents feared that without the protections, developers would buy the older, rent-controlled buildings and replace them with market-rate or luxury housing.

At a town hall meeting in February regarding the protections for the entire neighborhood, Nick Zayas, a resident at 744 Ridgeley, testified that the residents had just received unofficial eviction notices from their new owner, Vardi Baruch, who had also filed a demolition permit with the city, effectively fulfilling the narrative that their new owner would try to replace their units. Baruch offered $10,000-$20,000 to the residents. 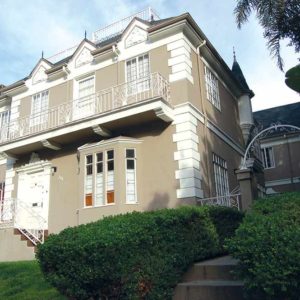 The residential building at 744 S. Ridgeley Drive has been nominated to become a historic cultural monument.
(photo by Gregory Cornfield)

The MMRA and representatives from Councilman David Ryu’s office reached out to the tenants to explain to them their rights when dealing with evictions. On March 13, MMRA vice president Ken Hixon organized a meeting with the tenants of 744 Ridgeley Drive, as well as other neighborhood advocates and consultants with architectural firms. On March 28, the Los Angeles City Council approved the Miracle Mile’s HPOZ with the 744 S. Ridgeley Drive structure reinstated into the boundaries. To spare the tenants any potential harassment from the property owner, the MMRA and tenants at Ridgeley Drive decided not to publicize attempts to preserve the building.

Nine people live in the six units now. Zayas has been living there for four years. He said the current owner told residents that he planned to tear the building down.

Michael Dykes has lived at 744 S. Ridgeley Drive for 12 years with a handful of different owners. He said the residents living there now are uncertain about the owners’ plans after the HPOZ was established. Dykes said over the past couple weeks, the owner has sent people to take measurements of the units, but he doesn’t think they plan to demolish the building.

Dykes said the tenants have always been friendly, but the effort to stick together to stay in the building and understand their rights have brought them all closer together.

But Dykes said the tall, market-rate apartment complex across the street is all they need to see to be reminded that countless developers would love to buy the building and turn it for a profit.

“It’s so transient over there across the street, I don’t know any of the residents in there,” he said.

He said he doesn’t want to be overly optimistic, but city staff with the planning department said every nomination for a building designed by Northman has received HCM status. But Dykes knows even if a building is 100 years old, it doesn’t mean it is historic.

“Ours is in good condition. It still looks like the original,” he said.

Zayas said he can point out buildings designed by Northman all over Los Angeles after learning more about her.

“She has built so many around Los Angeles. You can really see how her style left a mark on Los Angeles and helped define the character of an L.A. building in the 1930s,” he said. “The one thing I did know though, was that this was a beautiful place.”

“I love my neighborhood and I love my building,” he said.

Zayas said he was contacted on April 1 about the offer to leave his unit without getting the city involved, and he said no. Otherwise, the tenants have not been in communication with the owner.

Hixon said the MMRA is deeply committed to preserving the historic resources of the Miracle Mile. He said there are other properties within the Miracle Mile HPOZ and historic properties along Wilshire that are eligible for the National Register of Historic Properties.

“We intend, in time, to secure HCM status for all of the properties,” he said.

Baruch did not return phone calls by press time.