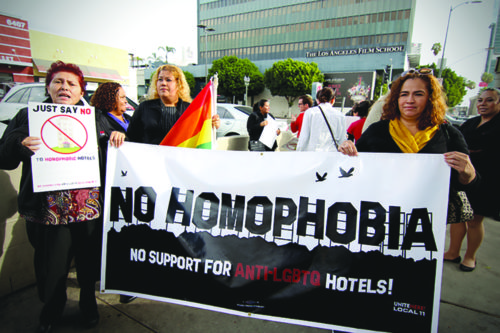 Opponents of the Ivar Garden Hotel proposal demonstrate in Hollywood against a construction company president who allegedly is associated with groups that promote discrimination.
(courtesy of UNITE HERE Local 11)

The Los Angeles Planning Commission approved a recommendation in September 2016 for a 21-story hotel at approximately 232 feet tall with at least 50 guest rooms at the northeast corner of Sunset and Cahuenga Boulevards. The proposal by R.D. Olson Development includes a zone and height change for the property, and also includes demolition of a one-story, drive-thru restaurant.

After several delays and continuations, the Hollywood Ivar Gardens Hotel proposal is next scheduled to be considered by the Los Angeles City Council’s Planning and Land Use Management (PLUM) Committee in May. But opposition is growing after four appeals were submitted and a new ad campaign was launched this month in Hollywood by a labor union.

UNITE HERE Local 11 – a labor union that represents more than 23,000 hospitality workers in hotels, restaurants, universities and convention centers, purchased advertising on bus benches around Hollywood that condemn the proposal as “anti-LGBT” and homophobic. The group also started a petition with 223 signatures against R.D. Olson Construction – the development company’s sister company – and its president Bill Wilhelm. The labor union said the project is linked to “anti-gay” organizations that publish articles supporting “conversation therapy” for LGBT children, as well as the criminalization of abortion and repeal of marriage equality.

According to Elle Farmer, a transgender spokeswoman with the labor union, Wilhelm claimed to be an executive council member of a Christian Fundamentalist group called Legatus, which publishes articles supporting homophobic and transphobic policies.

Farmer reviews development applications for the union group in the 13th and 4th Council Districts, as well as in West Hollywood. The Ivar Gardens Hotel proposal caught the group’s attention immediately because of an agreement made to allow minimum review for the environmental impacts, even though it requires a height and zone change. Farmer said the group has a number of additional concerns related to the California Environmental Quality Act.

“When it looks like the review process hasn’t been fulfilled for such a large building it raised some red flags,” Farmer said.

While further investigating the development and construction group, Farmer discovered the organizations that Wilhelm is associated with, including Legatus. The company allegedly authored and funded an amicus brief in the Hobby Lobby case in which courts debated the rights to deny health coverage based on religious exemptions. She said it was very concerning, especially considering the developers want to “skirt” the review process, and they do not have an agreement with the community to provide benefits, or rely on local hiring programs.

“It could have an outsized impact on the community,” Farmer said. “As a trans person, it’s terrifying.”

Joey Sanchez, communications director for the construction company for R.D. Olson, said the union’s opposition is a “bullying tactic” to “force us to agree to a lot of the labor agreements.”

“Most of the accusations are not true,” he said. “Wilhelm was just a member [of Legatus.] He was not active, and he went for business networking.”

Sanchez said on the construction side, they have had a fair hiring process that has celebrated diversity.

Sanchez said he is gay and that Wilhelm has never had an issue with gay people. He added that the views of Legatus are not representative of his boss’ views.

UNITE HERE Local 11 has been in contact with Councilman Mitch O’Farrell, 13th District, who was not available for comment by press time.

“He’s aware of the conditions,” Farmer said. “Communications are ongoing. [O’Farrell] used pretty strong language when introducing a measure about transgender visibility, and the president surrounding himself with ideologues. That’s something that can happen here too.”

Appeals were also filed by Roberto Mazariegos, Rachael Koss for CREED LA and the LA Film School. Representatives for the development company for R.D. Olson released a statement on Wednesday.

“Our attorney and consultants are responding to the CEQA-related concerns, and they feel that we have properly addressed all issues,” said Anthony Wrzosek, vice president, planning and development, R.D. Olson Development.

The PLUM Committee is scheduled to consider the proposal at 2:30 p.m. on May 2 at City Hall.

Homelessness in 2017: Officials focus on most in need

City Attorney: Spicer’s comment is ‘assault on the truth’