Los Angeles City Councilmen Paul Koretz, Mitch O’Farrell and Mike Bonin on April 5 introduced a resolution instructing all city departments to refrain from conducting business with the state of North Carolina until state legislators repeal House Bill 142 which prohibits their local jurisdictions from enacting protections for the LGBTQ community. 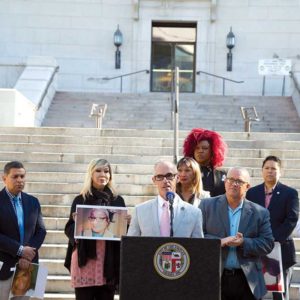 “I am outraged and quite frankly ashamed of the state legislators in North Carolina,” said Koretz, 5th District. “As elected leaders, we are in charge of creating laws to protect our community members from discrimination. We are supposed to be crusaders for social action and social justice for all, not just the select few.”

Recently, North Carolina lawmakers reached a deal to repeal the state’s “bathroom bill,” House Bill 2 (HB2), which passed in March 2016. It affected access to sex-segregated public facilities for an individual based on a determination of their sex as defined in some specific way – such as their sex as assigned at birth or as listed on their birth certificate.

However, according to the city council members in Los Angeles, HB 142, “the compromise bill,” leaves members of the LGBTQ community with no state level statutory rights or protections against hate and bias in the workplace or at home, and more nefariously prohibits local governments from enacting such protections. While HB 2 overtly discriminated against transgender individuals, Koretz said, HB 142, which replaced HB 2, isn’t much better because it “covertly endorses institutional discrimination on the basis of sexual orientation and gender identity.”

In April of 2016, the Los Angeles City Council adopted a resolution – introduced by Bonin, 11th District, O’Farrell, 13th District, and Council President Herb Wesson, 10th District – enacting a city policy banning city employees from traveling to the states of North Carolina and Mississippi for non-essential city business, over their discriminatory laws against the LGBTQ communities, including North Carolina’s HB 2.

Last week, Mayor Eric Garcetti encouraged the city council to maintain the ban in light of the new law in North Carolina.

“Every American deserves to live free of discrimination, and the law signed last week by Governor Cooper does nothing to protect the rights and dignity of our LGBTQ brothers and sisters,” Garcetti said.

The mayor urged the city council to extend L.A.’s ban on non-essential travel to the state by city employees.

“I would sign that ban right away, and will continue doing everything in my power to make sure that Angelenos’ tax dollars are never spent to support bigotry based on sexual orientation and gender identity,” Gargetti said.

The council’s Budget and Financing Committee will hear the resolution before it’s considered by the city council.