The 60-minute musical for elementary and middle-school performers is based on a Broadway production directed by Julie Taymor and the 1994 Disney film. The cast includes approximately 90 students led by director Linda Miller. 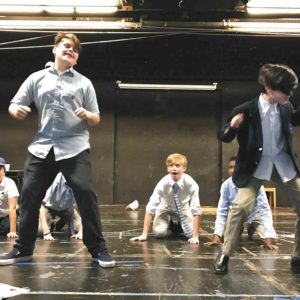 Students are busy rehearsing for their roles in “The Lion King Jr.”
(photo by Linda Miller)

“‘The Lion King Jr.’ is a brilliant way to teach students about the circle of life. The music soars throughout the show and the students connect to the beats of the African Pridelands while learning to collaborate on stage,” said Dr. Sheryl Cohen, director of elementary and early education at Pilgrim School and producer of “Lion King, Jr.”

“Pilgrim students always surprise with their talent and dedication and this year’s production will be spectacular.”

The production follows the epic adventures of Simba, a curious cub that struggles to accept the responsibilities of adulthood and his destiny as king. Along the way, the young lion encounters a colorful cast of characters including lioness Nala, meerkat Timon and warthog Pumbaa. To claim his rightful place on the throne and save his beloved Pridelands, Simba must find his inner strength and confront his wicked Uncle Scar.

“The Lion King Jr.” features songs from the 1994 film such as “Hakuna Matata” and the Academy Award-winning “Can You Feel the Love Tonight,” as well as additional songs from the Broadway production. The two performances of Disney’s “The Lion King Jr.” are open to the public and will be held in Stuart Hall at Pilgrim School, 540 S. Commonwealth Ave. Admission is $5. For information, visit pilgrim-school.org.

Have a BLAST in the pool with the Sharks