Have a BLAST in the pool with the Sharks

The Michael Phelps and Janet Evans of tomorrow are training today at the West Hollywood Pool and at Marlborough School with the BLAST Sharks, a competitive swim program led by veteran USA Swimming Coach Peter Lambert. 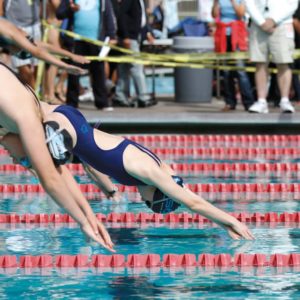 BLAST Sharks, under the tutelage of USA certified coaches, have a reputation to advance to collegiate, junior Olympic and Junior National competition. The training focuses on health and well-being, giving young athletes exercise that benefits their minds and bodies, Lambert said.

“We’ve found that the kids actually perform better in school. All of their nervous energy dissipates,” Lambert said. “The direction and training translates into better focus. We try to create strong individuals. It’s not pitting athletes against each other. The stress is discipline and interpersonal relationships. We teach them to use their skills to achieve their goals.”

“The meets are very exciting. It’s definitely very challenging and competitive,” Lambert said. “Not unlike the Olympics, there is a ‘ready room’ where the swimmers get psyched up and stretch out. They get paraded out to the platform and their names are announced. They get ready and when the starter goes off, it’s all business. Hundreds of people are cheering and it’s all about racing. It’s a great experience for the kids.”

Lambert was a standout swimmer at the University of Wisconsin. He qualified for the USA Swimming National Championships multiple times and coached in the USA Swimming program. He began running a swimming program at the Los Angeles Tennis Club 12 years ago, and two years later became head swimming coach at Marlborough School in Hancock Park. He said the BLAST Sharks program is flourishing at the West Hollywood Pool.

“Things are going nicely,” Lambert said. “The exciting news is they are building another pool (as part of the West Hollywood Park renovation). It’s going to be state of the art. We will be in that pool in summer 2018.”

Other exciting news for the BLAST Sharks is that Marlborough School opened its new 13-lane, state-of-the-art pool in 2016. The professional facilities are a perfect place to train the swimmers of tomorrow, Lambert said.

Lambert encouraged anyone interested in improving their swimming skills or competing to consider the BLAST Sharks. Information is available at blastswimming.org. And while the program is goal-oriented and challenging, it’s also a rewarding and fun experience in which young swimmer have a “blast,” Lambert added.

Defendant pleads not guilty to murder on subway platform

Yes!! I am a blast swimmer age 11 and I am also a Junior Olympic Medalist. Everyday my coaches push me to become the best swimmer and best person i can be. If you are considering swimming competitively u should absolutely consider joining the BLAST sharks. I love all my coaches and all my teammates are like my family.