Stop signs were recently installed for all directions of traffic at the intersection of Formosa Avenue and Clinton Street under a partnership between the Mid City West Community Council (MCWCC) and the Los Angeles Department of Transportation. The stop signs are a traffic-calming measure in a residential neighborhood, said Scott Epstein, chair of the MCWCC. It was the fifth and final intersection in the local area to have four-way stop signs installed under the council’s Neighborhood Greenway plan. The other intersections are Rosewood and La Jolla Avenues, Rosewood and Laurel Avenues, Rosewood and Edinburgh Avenues, and Rosewood and Spaulding Avenues. 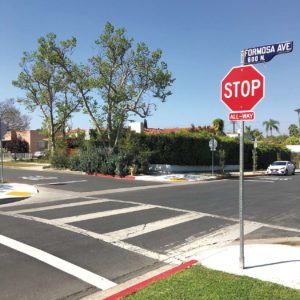 Formosa Avenue and Clinton Street was the fifth intersection where stop signs were recently installed in neighborhoods within the Mid City West council’s boundaries.
(photo by Gregory Cornfield)

“It’s definitely aligned with the Mobility Plan and Vision Zero,” Epstein added, referring to the city’s plans to make alternative forms of transportation safer and more attractive for Angelenos. “It makes the streets safer for biking and walking.”

Epstein said the city is also working on another project for cyclists at the intersection of Formosa and Willoughby Avenues. Vehicular traffic is currently blocked from continuing north on Formosa Avenue to prevent motorists from using the residential street to access a Target store at Santa Monica Boulevard and La Brea Avenue. Epstein said a short bike lane has been created to allow cyclists to continue north while still blocking vehicles.

“It’s in the process,” Epstein added. “They already striped the bike lanes but they are adding some signage. I expect it will be done in the next week or two.”

LACMA redesign gets a new look