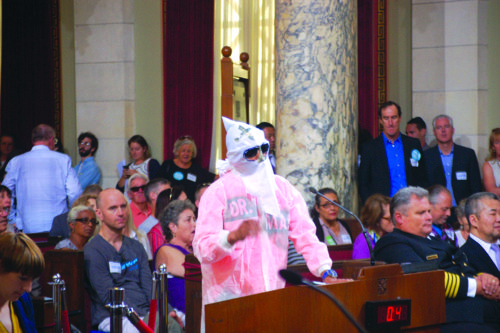 A man yelled at the city council and flashed obscene gestures during a meeting in 2015 before he was asked to leave.
(photo by Gregory Cornfield)

The Los Angeles City Council last week approved a motion asking the city attorney to draft an ordinance that could allow residents to be charged with trespassing if they’re not abiding by public safety, use and access rules on city property.

“Having served on the council the last two years, he recognizes there is a serious problem with those who continue to disrupt council meetings,” Montemayor said. “He is eager to hear from the city attorney as to how this motion would be implemented if passed.” 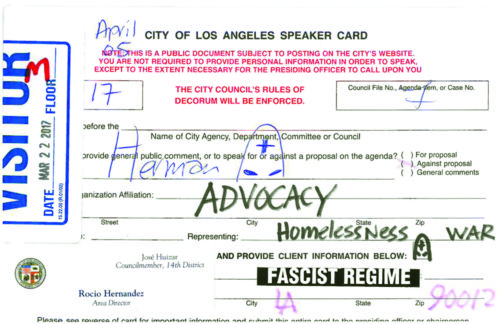 At an April 5 Housing Committee meeting, someone in the audience turned in a card with drawings of KKK hoods.
(courtesy of L.A. City Hall)

Eric Preven, a regular attendee of city council and Los Angeles County Board of Supervisors meetings, said the motion would detract from civic engagement.

“We should not be focusing on providing the opposite of incentives to come and participate in local government,” Preven said.

While some City Hall meeting attendees often elicit the council’s ire by yelling, cursing, making animal noises, accusing council members being fascists or veering off topic during public comment, a few specific incidents have created greater cause for concern.

At a May 2016 Rules, Elections, Intergovernmental Relations and Neighborhoods Committee meeting, on which Wesson was chair, Encino-based attorney Wayne Spindler handed in a speaker card with racist imagery. The card called Wesson, who is black, a racial slur and had a drawing of a stick-figure hanging from a tree. Spindler was arrested, but wasn’t charged.

“As a young man, I sat at the kitchen table of my grandmother’s, and I heard … stories of liquored-up Klansmen running through the South, terrorizing black people, about crosses actually being burned on the lawns of their friends,” Wesson said at a press conference last year, addressing the incident.

In a separate press conference, Wesson said he appreciated the support from the community in the aftermath of the episode.

Council members have experienced similar occurrences at council and committee meetings. At an April 5 Housing Committee meeting, someone in the audience turned in a card with drawings of KKK hoods.

A 2008 decision by the Federal Fourth Circuit Court of Appeals in the case of Steinberg v. Chesterfield County [Va.] Planning Commission may provide some precedent for the city council’s motion. A Chesterfield County, Va., resident, Robert C. Steinberg, sued his local planning commission for cutting off his public comments when he began speaking about an item other than the one for which the commission was seeking comment at the time. He also conducted himself in a “disruptive manner,” according to the court’s decision, ruling against Steinberg’s claim that his First Amendment rights had been violated.

“Officials presiding over such meetings must have discretion … to cut off speech which they reasonably perceive to be, or imminently to threaten, a disruption of the orderly and fair progress of the discussion, whether by virtue of its irrelevance, its duration, or its very tone and manner,” according to the court’s decision.

But the case did not involve charging Steinberg with trespassing, or with any other illegal action.

City Attorney: Spicer’s comment is ‘assault on the truth’