The Hollyhock House was renovated and reopened to the public for tours in 2015. The facility was built before the Americans with Disabilities Act of 1990 and has limited access. However, as a National Historic Landmark, the structure cannot be altered. The virtual reality tour will be available online and accessible to anyone with a computer or mobile device. 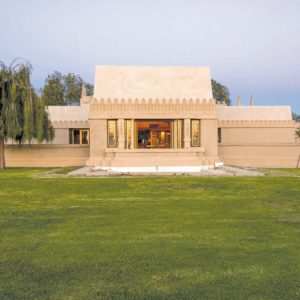 Members of the public will be able to tour the Frank Lloyd Wright-designed Hollyhock House online through a project funded by the Los Angeles City Council.
(photo courtesy of the 13th District Council Office)

“This vote by the city council will allow everyone, everywhere, the opportunity to visit the Hollyhock House,” said O’Farrell. “The video project will make the amazing historic landmark accessible to more people than ever before, shattering the notion of limited access due to challenges because of its unusual design or obstacles inside the structure.”

Hollyhock curator Jeffrey Herr said three-dimensional cameras will create a visual tour, allowing people to navigate as if they were in the building.

“We are grateful to the city council for approving this new project funding for Hollyhock House so we can serve people with mobility or physical issues,” said Danielle Brazell, general manager of the Department of Cultural Affairs. “We will now be able to make all of Hollyhock House virtually accessible to both on- and off-site audiences interested in this treasure, increasing creative engagement and economic development.”

The council approved $133,000 to cover the costs associated with the Virtual Reality Accessibility Project. The funds will pay for filming, post production, website design and implementation, as well as docent training on the digital platform. The money comes from the city’s Innovation Fund 2016-17 and the project should be complete later this year.