Hollywood Heritage, the TCL Chinese Theatre, NBCUniversal and the Hollywood Foreign Press Association will celebrate the Chinese Theatre’s 90th anniversary with a presentation of the newly restored 1934 Cecil B. DeMille film “Cleopatra” on May 1 at 7:30 p.m.

John Landis will introduce the film and serve as a keynote speaker. 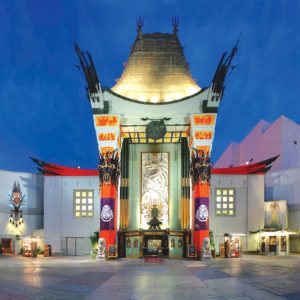 The Chinese Theatre, designed by the celebrated architectural firm Meyer and Holler, was built in 1927 for legendary promoter Sid Grauman. It was his second movie venue on Hollywood Boulevard. The theater is listed in the National Register of Historic Places, and is a Los Angeles Historic Cultural Monument. For nine decades, the owners of the theater have shown remarkable stewardship of the historic features while carefully updating the viewing experience to IMAX.

Hollywood Heritage works to educate the public about the role of the early film industry, and to preserve the historic built environment in Hollywood.

DeMille’s version of the Cleopatra story, with Claudette Colbert as the legendary siren of the Nile, was a critical and financial success for Paramount. “Cleopatra” received several Academy Award nominations and was given the Best Cinematography award. The film is noted for its magnificent Art Deco-inspired sets.

TCL Chinese Theatre is located at 6925 Hollywood Blvd. For information and tickets, visit hollywoodheritage.com and brownpapertickets.com/event/2916255.

‘Month of Big Sundays’ starts May 1