Trophy returns to Miracle Mile for first time since 2002 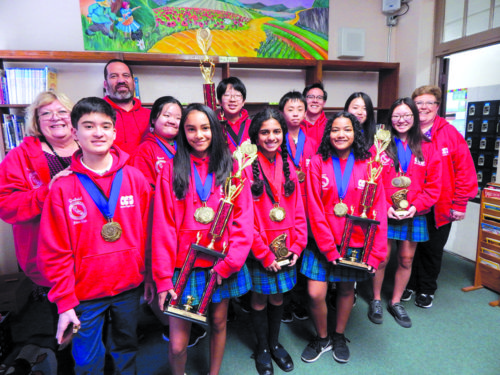 The team placed second in the state competition in 2016 and was determined to capture first place this year. The students took the top honors in the Archdiocese of Los Angeles Academic Junior High Decathlon on March 5, which paved the way for state competition.

The young academic decathletes defeated teams from eight Catholic junior high schools throughout California and one team from Colorado during the state competition. Principal Tina Kipp and the team’s coaches said they couldn’t be more proud of the students and their determination to win.

“This was an amazing victory for our school,” Kipp said. “I was really confident in our team and I know they were confident approaching it. They jumped into it and didn’t lose momentum. It was a combination of hard work, persistence on the part of the coaches and decathletes, and determination.”

Ramirez, who was the team captain for the logic quiz, said participating in the decathlon was a rewarding experience.

“I was a lot more nervous this year, but I had so much more confidence in the team,” Ramirez said. “We wanted it and we deserved [a win].”

Grace Kim, who designed the team’s sweatshirts with a logo and phrase in Latin translating to “hard work conquers all,” said the team was well prepared for the state competition.

“I felt that was something we went by,” added Kim, referring to the phrase on their sweatshirts.

Moldavon said preparation for the academic decathlon is demanding. Students started studying last summer and prepared during lunch hours, after school and on weekends. The students overcame many obstacles during their studies, including a pipe burst that flooded their study room. The perseverance paid off, she added.

“We are at our best when things are falling apart,” Moldavon said. “Somehow, they found a way to use their time wisely and help each other, and we won. The kids were fun, exciting and inspirational to work with.”

Moldovan and Kipp said the students are rich in character and have bright futures. All of the 8th graders have been selected to attend prestigious high schools throughout Los Angeles including Immaculate Heart, Notre Dame Academy, Loyola High School, Harvard-Westlake School and Cathedral High School.

Kipp said it will be the first time nearly all of the team is graduating and moving on, but she hopes Connors will continue the winning team’s legacy and is confident other students will fill the open positions.

“It’s going to be a rebuilding year,” Kipp added. “We have back-to-back returns to state. We are looking forward to a young team that will face an even bigger challenge.”

Cathedral Chapel School is located at 755 S. Cochran Ave., in the Miracle Mile.

No room in WeHo for hotel moratorium