WeHo proposal would update policy to allow for more billboards 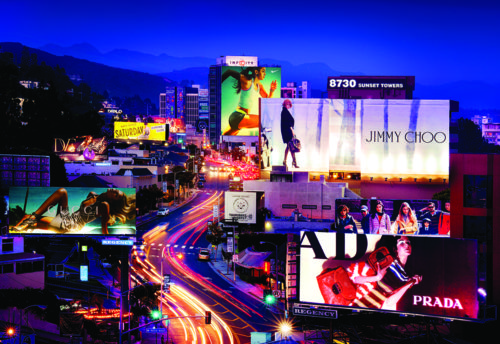 Large billboards and signs – along with historic clubs, hotels, boutiques, restaurants and routine visits from celebrities that would shut most other cities down for weeks at a time – have been crucial to the identity of the Sunset Strip. Bright lights and advertisements have been part of what has kept the flow of actors, comedians, artists, writers, athletes, musicians of every genre, and countless tourists coming from all over the world to the 1.6-mile road that has become a timeless entertainment destination.

Now, with industries evolving and technology advancing, the city of West Hollywood is beginning the process of updating its signage policy to see how billboards will continue to fit into the formula. Residents are invited to review and comment on a proposed policy that will help guide City Hall in regulating the billboards and signage along the Sunset Strip.

The policy would specifically encourage creativity, new technology, public art and urban design benefits for off-site signage proposals, with the goal of continuing to attract visitors to the Sunset Strip. It would allow for a limited number of potential new billboards to be integrated into new development and significant facade remodels, as well as add regulations for a limited number of digital billboards and update modifications for existing billboards. Under the existing proposal, the limit of new sign faces would be no more than 18 over the next 15 years, 17 of which could be digital, and three existing billboards would be allowed to convert to digital. Any new billboard would not be approved without individual review under the California Environmental Quality Act (CEQA).

Councilman John D’Amico has long been a champion for billboards on the Strip and the culture they help promote, he said on Wednesday. He said much of the allure of the “iconic” Sunset Strip is heavily rooted in its history, and updating the billboards and their policy is part of making sure the Strip stays iconic and maintains a unique experience.

“It’s a place of culture making,” he said. “Personally, I think we’re at our best when we’re saying we don’t need another bank that closes at 6 p.m.”

D’Amico and Councilman John Duran authored a regulation approved last year requiring all new billboard structures to include special design features or art elements. D’Amico said West Hollywood is the first city in the world to pass such a regulation, and some designs have already been approved.

He said they will enhance the Strip, and some proposals include interactive advertisements, 21st century technology, 3-dimensional aspects, and exciting ideas for innovative advertising techniques.

Duran said the technological advances seen in the music industry – where customers purchase songs on iPhones instead of “buying music at Tower Records” – will be reflected in the updated policy and with the advertising on the Strip.

“We’re trying to figure out how to keep it relevant in an internet-driven world,” he said.

Duran said the Strip has always been evolving and has always been rebranding itself, and the billboards and advertising are just as much a part of the branding of the Sunset Strip, like the hotels and nightclubs.

“From the Marlboro Man to the launch of the Beatles’ ‘White’ album, the advertising has been part of that story, and that lifestyle that the Strip epitomizes,” he said.

The Strip continues to be home to some of the most visible and lucrative spots for advertisers. The city estimates that 50,000-60,000 cars travel along the Strip per day, with 1.75 million nighttime patrons each year.

D’Amico said the business community loves the billboards, and there are already many applications to build more or modify existing billboards.

Visit West Hollywood – a nonprofit business improvement organization that deals with tourism for the city – showcases the billboards in campaigns to pull in travelers. According to Susan Wilson, a public relations spokesperson for Visit West Hollywood, one new promotion the organization created features three women taking a “selfie” photo on the Sunset Strip with a more glamorous version of themselves appearing on a billboard behind them.

“The billboards tell their own story throughout the eras,” Wilson said. “We find that people who come from rural areas are enamored with the messages.”

City staff has started gathering feedback from residents in the community. At an outreach meeting on Tuesday, some residents expressed concerns that the city might be opening the door for too many billboards, and that digital billboards will add more distraction for drivers.

However, the city is currently also working on otherwise unrelated measures and projects to increase safety along the Strip and enhance the overall pedestrian experience. And the existing signage policy proposal includes regulations to limit brightness, contrast, fast motion and other aspects that affect drivers and quality of life.

Additionally, one aspect that makes the real estate on the Strip so desirable is the level of congestion that naturally limits traffic speed and allows drivers to consume the advertisements. The proposed regulations are also aimed at avoiding or minimizing the potential for environmental effects. According to the city’s public notice, the proposed project was analyzed pursuant to CEQA, and would result in little to no impacts to land use and planning, and less than significant impacts related to aesthetics, air quality and cultural resources.

The public comment period is open until Thursday, April 27, and the city’s commissions and committees will review and alter the proposal before it is considered by the full city council.