The 12th annual South East European Film Festival (SEEfest) selected “The Constitution” to open the 2017 Festival with a gala event on April 27 at 7 p.m. at the Writers Guild Theater in Beverly Hills. 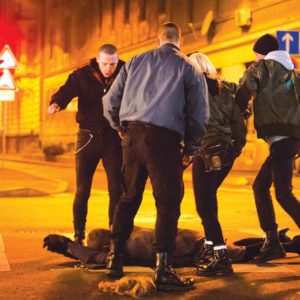 “The Constitution,” a film by Croatian director Rajko Grlic, will be screened on the festival’s opening night.
(photo courtesy of SEEfest)

The film was directed by Croatian director Rajko Grlić.

“Such an excellent and timely film as ‘The Constitution’ does not come by every year,” said Vera Mijojlić, founder and director of SEEfest. “It is an example of a great director-writer pairing between Grlić and author Ante Tomić, whose humorous political columns delight and entertain readers throughout the Balkans. With three amazing actors from Serbia and Croatia this very funny and poignant ‘love story about hate’ is sure to delight Angeleno audiences as well.”

Other program highlights include the world premiere of “Roza of Smyrna,” a Greek love story spanning turbulent Greek-Turkish history of the 20th century; Adrian Sitaru’s “The Fixer,” a Romanian drama about journalistic conscience in the ultra-competitive media world; music documentary “Balkan Roots” by Australian pair Chris Rabbitt and Anthony Fletcher; “Anishoara” by Ana-Felicia Scutelnicu; and “Glory” by Kristina Grozeva and Petar Valchanov, the duo behind last year’s international winner, “The Lesson.”

The Writers Guild Theater is located at 135 S. Doheny Drive.