A female pedestrian was killed and her husband was critically injured after a collision on April 9 in Beverly Hills.

The victims were standing near the corner of Wilshire Boulevard and Bedford Drive at approximately 5 p.m. when two vehicles collided in the intersection. The force of the collision sent one of the vehicles onto the sidewalk where it hit the two victims. 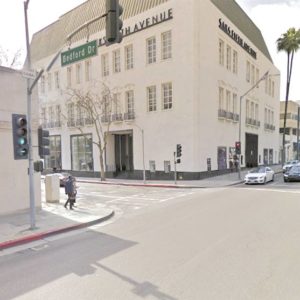 Los Angeles County Coroner’s Office spokesman Ed Winter said the decedent was a woman in her late 60s. The male victim remains hospitalized in critical condition, and authorities are not releasing the deceased victim’s name pending notification of next of kin, Winter said.

Lt. Renato Moreno, with the Beverly Hills Police Department, said the collision is under investigation. The crash involved a Mercedes-Benz G-Class SUV traveling east on Wilshire Boulevard and a Porsche Cayenne heading south on Bedford Drive. The intersection is west of Rodeo Drive and east of Brighton Way.

A Toyota Prius that was traveling north on Bedford Drive was also struck but sustained minor damage and its driver was not injured. The Prius’ driver was indirectly involved in the collision.

Moreno said investigators are uncertain which driver was at fault or if one of the drivers ran a red light or committed another traffic violation. He said multiple witnesses have called investigators offering information and detectives are in the process of interviewing them.

“Our investigators are still looking for witnesses. The cause or fault is still pending,” Moreno said. “It’s such a tragedy.”

Anyone with information is asked to call the Beverly Hills Police Department at (310)550-4951.

Defendant pleads not guilty to murder on subway platform