Authorities seek bandit who robbed banks on both coasts 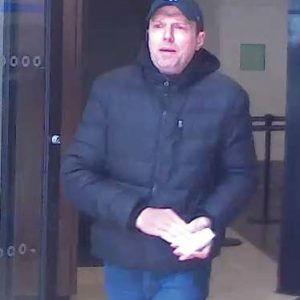 A bank security camera captured a photograph of the suspect who has been dubbed the Coast to Coast Bandit.
(photo courtesy of the FBI)

The incident in Los Angeles occurred on April 17 at a Chase Bank branch at 8140 Sunset Blvd. The suspect entered the bank and presented a note to a teller threatening that he had a gun and knife. The man was last seen exiting the bank’s front door leading to Sunset Boulevard.

The suspect is also wanted for robberies on March 9 and March 13 at banks in New York City. The Coast to Coast Bandit is white, but no further information was provided about age, height and weight. Witnesses described him as having a sunburn during the robbery at the bank on Sunset Boulevard. He wore a New York Yankees baseball cap during the robbery in Los Angeles on April 17 and during the hold-up in New York on March 13.

Anyone who sees the Coast to Coast Bandit is advised to call 911. Anyone with information about his whereabouts is urged to contact the FBI’s Los Angeles office by calling the 24-hour hotline at (888)226-8443.