In April, 1992, Los Angeles Police Department Det. Warren Porche was a patrol officer assigned to the Wilshire Division with two years on the job.

The 24-year-old officer was scheduled to work the evening shift on April 29, 1992, and arrived at the police station on Venice Boulevard near La Brea Avenue not knowing what to expect after a jury earlier that day acquitted four LAPD officers of using excessive force against motorist Rodney King. Porche went on patrol with his partner like any other day, but quickly learned that April 29, 1992 would be unlike any day he had experienced on the job, or ever since.

“We knew it was going to be a busy, busy night and we were warned to be prepared. Nothing big had started happening at that time, but the watch commander said to get something to eat before we went out because we probably wouldn’t have time to eat later,” Porche said. “Pretty much immediately, things started happening. There was a Foot Locker store at Rodeo and La Brea and we got a call that there were looters. While we were there, a carload of gang members pulled up and rolled down the windows and were staring us down. You could just feel the tension.” 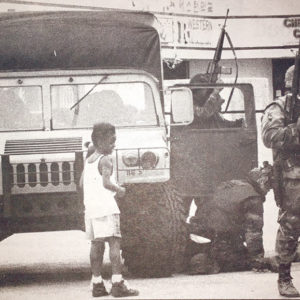 This photo – published May 7, 1992, in the Park Labrea News and Beverly Press – shows local children interacting with the National Guard on Santa Monica Boulevard near Western Avenue.
(photo by Josh Barash)

“During that time, we learned that the things at Florence and Normandie were going down,” Porche said. “We got the call for all Wilshire units to respond back to the station. On our way back, we were getting shot at.”

Porche said he and his partner made it back to the police station unscathed and awaited further orders. The LAPD assigned Wilshire Division officers to four-person squads that night, and the officers went back into the field.

“There is a photo of me that night with other officers walking on La Brea, and there is a building on fire behind us,” Porche said. “There were many buildings set on fire. That happened the first night.”

The officer said after his shift ended, he went home to Glendale. The following day, he was driving to work and the scene was surreal.

“I was driving through Hollywood and everything was nice and peaceful. It was like a ghost town,” Porche said. “Then I drove down Rimpau and when I got to Pico, it was like all hell broke loose. Whole buildings were on fire.”

Porche said the second day of the civil unrest was even more harrowing. Officers were coming under fire in neighborhoods throughout the southern part of the Wilshire Division. At San Vicente and Venice Boulevards, just east of the police station, the road was blocked with dumpsters that were set ablaze, he said.

“They were trying to slow us down so they could shoot at us going up Venice,” Porche said. “It wasn’t safe in two-man cars. Being an officer with two years on the job, I wanted to go out and do something. Your adrenaline is pumping. We got shot at near Venice and La Brea. We tried to do whatever we could do. We saw people looting and all we could do was tell them to leave. But when officers left, they would go back.”

The officer said many buildings were destroyed by arson fires and numerous shootings and other crimes occurred, but he and his fellow Wilshire Division officers persevered. After the National Guard was called in and three or four days passed, the rioting and looting began to subside, Porche said. But the violence was not over. Porche said officers in Koreatown witnessed store owners involved in gunfights with people targeting their businesses, and the officers were caught in the middle.

By many estimates, the 1992 Los Angeles Riots caused more than $1 billion in property damage, claimed more than 60 lives and injured more than 2,000 people. With the 25th anniversary of the civil unrest approaching on April 29, Porche said his experiences during that troubled period have been on his mind.

“I’ve been thinking about it. I have been watching programs,” he said. “I have a teenager now, and we had a conversation about it. I was 24 then and 49 now, with 27 years on the job. When the anniversary comes around … it makes you reflect.”

Porche, who is now assigned as a detective with the LAPD’s Commercial Crimes Division, said the years immediately after the Los Angeles Riots continued to be tumultuous. Relationships were still strained between the community and the police department.

Prior to the riots, beliefs that racism and police brutality existed were common and many members of the black community in South Los Angeles viewed the police as their enemies. The verdict in the Rodney King beating case was the spark that started the civil unrest after tensions had already been brewing.

Porche, who grew up in South Los Angeles, knew the negative sentiments many people in his community had toward police. In the years after the riots, he was assigned to posts in South Los Angeles where he was tasked with addressing gang problems, some perpetrated by people he personally knew from the neighborhood. He adopted a fair but determined approach to successfully solve issues, he said.

Porche said significant change occurred when the city entered into a consent decree with the federal government in 2000 requiring reforms within the LAPD. Community-oriented policing became a department hallmark, and the relationship between officers and the public improved.

In 2014, Porche returned to the Wilshire Division as burglary detective prior to taking his current assignment with the Commercial Crimes Division. He said the area has changed dramatically, but his recollection of the 1992 civil unrest hasn’t faded.

“The landscape changed. Some things were rebuilt, but others were not. [A] pawnshop [that burned down near Pico and La Brea] never came back. The memories are still there.”