New alligator duo enjoys the ‘swamp’ at the L.A. Zoo

The Los Angeles Zoo announced that Reggie the American alligator has met his match.

Tina, a mature, female American alligator, moved into Reggie’s bachelor pad last August. After a somewhat bumpy introduction period, Reggie and Tina have grown close and are now happily sharing the same habitat – a Louisiana-inspired swamp with a pool, waterfall, ficus trees and plenty of shade. 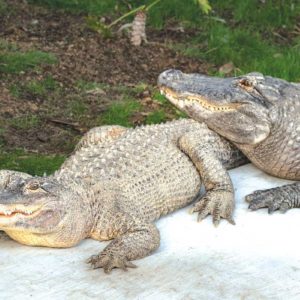 Reggie welcomes new roomie Tina to his bachelor pad at the Zoo.
(photo by Jamie Pham)

The pair recently awoke from brumation – a hibernation-like state that cold-blooded animals utilize during very cold weather – earlier this month and can be seen swimming, floating, and sunning themselves on the rocks together.

“This is really the best case scenario when introducing two alligators who are used to living alone,” said Ian Recchio, curator of reptiles and amphibians at the Los Angeles Zoo. “It was a labor intensive process helping these two alligators grow comfortable with each other, and it required a lot of patience from the animal keepers as they kept a close eye on the pair. But, Reggie and Tina have come a long way since August, and we can already see how positively guests are responding to the fact that Reggie now has a roommate.”

Tina came to the L.A. Zoo last August after spending 18 years as a resident of the Pasadena Humane Society. The nearly seven-foot-long alligator came to Pasadena in 1998 as part of a traveling wildlife education program. After the owners failed to get proper permits in California, Tina and the other animals ended up at the humane society in what was supposed to be a temporary situation. The other animals were eventually adopted, but Tina was unable to find placement outside of the shelter. After she outgrew her habitat at the humane society, she moved to the L.A. Zoo to be with Reggie.

Reggie, exact age unknown, garnered world-wide attention as the elusive alligator living in Lake Machado in Harbor City. He had been kept illegally by a private citizen who then set him loose in the lake. After avoiding capture for two years, Reggie was apprehended in May 2007.

Reggie and Tina aren’t meant to breed, but there is still a lot guests can learn about wild animals native to the United States by observing them.

“The L.A. Zoo has almost always had male and female pairs of alligators on display since it opened 50 years ago, and now we are lucky to have a pair on exhibit again,” Recchio said.

“There is a significant difference in size between males and females, and our visitors might get lucky and witness some of the amazing behaviors these crocodilians display as a pair.”

The Wallis hosts ‘The Encounter’