City crews planted 24 new London plane trees last weekend in Hancock Park, much to the delight of the Hancock Park Homeowners Association, which has been working to bring more trees to the neighborhood.

The trees were primarily planted along June Street between Third and Second Streets, and on McCadden Place between Third Street and Beverly Boulevard, said Cindy Chvatal, president of the Hancock Park Homeowners Association. Two additional trees were planted in the 100 block South Las Palmas Avenue and the 100 block of North Las Palmas Avenue. Councilman David Ryu, 4th District, provided approximately $7,550 for the planting. 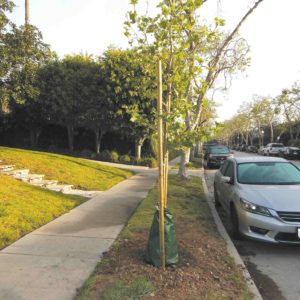 Last September, city crews cut down 31 trees in Hancock Park, angering members of the homeowners association. The Los Angeles Department of Public Works issued a statement explaining the removal was part of a project to prune healthy trees and remove trees that, “demonstrated signs of distress evidenced by mild to severe crown thinning and/or dieback.” Residents claimed the city didn’t tell them about the work ahead of time and called for notification if trees were to be removed in the future. Ryu said he was also unaware the trees were to be removed.

“The Bureau of Street Services Urban Forestry Division removed several trees without prior notification to the community or our office,” Ryu said. “I dedicated discretionary funds to replace these trees because they are an important aspect of the Hancock Park Historic Preservation Overlay Zone.”

Chvatal praised the city for planting new trees to replace those that were removed.

“It’s lemonade out of lemons,” Chvatal said. “Now is the time for planting, and the city helped replace those trees.”

The homeowners association is also working on a plan to “reforest” the neighborhood and is cultivating elm trees for future planting.

“Every year, we plant more and more trees,” Chvatal said. “Because of the borer beetle and the drought, we were having a hard time keeping some trees alive. It’s great, and the council office has been very helpful.”