The Stand opens in Pasadena

Back in 2004 I wrote one of my first restaurant reviews about a fast-casual dining spot in Encino called The Stand. I interviewed the CEO, Murray Wishengrad, who said he couldn’t find a good hot dog anywhere in the Valley, so he opened his own hot dog and hamburger stand.

Thirteen years later, my husband and I walked into the recently opened The Stand in Pasadena and met Murray’s son, Jason Wishengrad. 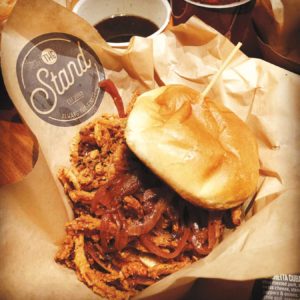 The French onion soup burger at The Stand is loaded with caramelized onions and crispy fried onions on top.
(photo by Jill Weinlein)

This Boston University graduate returned home years ago to help his dad at The Stand. A few years later the restaurant industry changed with the recession, so the Wishengrads introduced new items to the menu. Jason felt it was important to attract a budding crop of foodies seeking innovative and affordable destinations. He read a variety of cookbooks cover to cover, searching for creative ideas to keep up with culinary trends.

Jason recommended we try a few of his favorite menu items that included a Porchetta Cubano sandwich made with slow roasted pork, smoked ham, and melted Swiss cheese.

The Stand makes its own crisp and flavorful pickles, cut into 1/4- inch circles, and tops many of their burgers and sandwiches with them. The Cubano, for example, comes with the pickles along with deli mustard and green chile aioli slathered on a pressed ciabatta bun.

Next, we cut into his French onion soup burger. “I wanted to make and serve onion soup and discovered it’s great on a burger,” Jason said. He made a batch of onion soup in a large stock pot, then scooped up the beautifully cooked soft and caramelized onions and layered them on a grilled patty. A few crispy fried onions crown this burger in between a parmesan cheese double-crusted bun. What makes this burger taste just like French onion soup is the melted Gruyere cheese oozing down the sides. It’s served with a side of onion jus from the stock pot to dip the edges. Wow, it’s savory, sweet and oh so good.

The burgers are made with a blend of chuck roast and brisket. “We get our meat every morning from a local butcher in Inglewood. It’s prepared at midnight and delivered to The Stand by 7 a.m. six days a week.”

The turkey burger patty is made with all natural white meat and is juicy, not dry. “We sear it fast so it doesn’t dry out,” Jason said. It’s topped with butternut squash, bbq sauce, crunchy slaw and melted cheddar cheese.

They also make their own veggie burger with 12 different types of ground vegetables to form a moist patty. All burgers are served on a gourmet or wheat bun. You can also try it as a lettuce wrap for a healthier option.

“We appeal to families with moms ordering a gourmet salad, kids ordering a hot dog and fries, and dad happy with a burger and beer,” Jason said.

They serve craft beer on draft and four different wines by the glass.

Those seeking a hot dog or sausage can choose from a variety that includes the classic Stand Dog, Kosher Dog, or a spicy Big Red Dog on a poppy bun. Hot dogs and sausages can be made any-way-you-like from a choice of almost 50 condiments and loaded toppings. Some of the options include a fried egg, fresh guacamole, garlic mushrooms and grilled peppers.

Sausage varieties include chicken apple, chicken cilantro and a spicy Polish. Their bratwurst is served the “Three Pigs” way, with bacon-tomato jam, porchetta, Swiss cheese, chimichurri, and sweetened with a green apple and red onion slaw.

I ordered one of the five salads, the seared ahi tuna served on a mound of dark leafy greens, crispy onion strings, sliced avocado, cucumber, red peppers and dressed with a slightly spicy Thai vinaigrette.

As The Stand improved the quality and variety of their food, the owners opened a few more restaurants in the LA vicinity (Woodland Hills, Irvine, Northridge, and Century City). Then, last year, one of their loyal customers at their Century City location (who happens to be a venture capitalist) offered to finance more Stand restaurants with Pasadena being added to the list.  Across from The Pasadena Playhouse, this location offers a large interior dining area with a big screen television and two outside patios. Theatre patrons can order ahead and their food will be hot and waiting for their arrival.

Each location is a little unique. The Stand in Century City is a popular breakfast and lunch destination located in an office building on the Avenue of the Stars. This is the only location closed for dinner. Guests can order and receive their lunch within 10 minutes. “We have a great online ordering site. Place your order and pick it up as soon as you walk into The Stand,” Jason said.

Jason said The Stand is committed to the community by offering a “Take a Stand” fundraising program. “Recently we sponsored a Northridge Little League team,” he added. Approved groups receive a 5 percent discount on every visit, plus The Stand will give a percentage of the total bill back to the group’s program.

With a plethora of burger restaurants in Los Angeles, The Stand raises the bar with their gourmet burgers, hot dogs, and salads.