Attorney General Jeff Sessions on Monday said the national government will withhold enforcement funds from “sanctuary” jurisdictions, and said his office is exploring ways to “claw back” funds those jurisdictions already received. 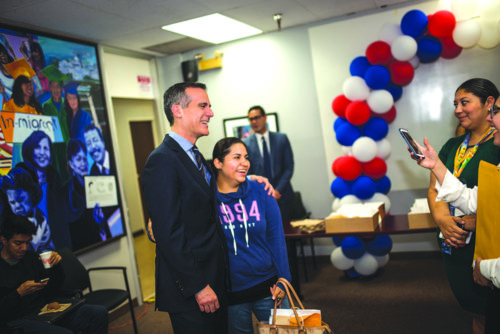 His statement fulfills President Donald J. Trump’s Executive Order, which stipulates that “sanctuary jurisdictions” – labeled as such by the Department of Homeland Security – would not be eligible for federal enforcement grants. Sessions said cities that arrest illegal immigrants for crimes should be required to turn them over to federal authorities.

“Unfortunately, some states and cities have adopted policies designed to frustrate [the Department of Justice’s] enforcement of immigration laws,” Sessions said on Monday. “This includes refusing to detain non-felons on federal detainer requests, or otherwise failing to comply with these laws.”

And after Trump was elected in November, the city of West Hollywood declared it will remain a sanctuary city, and that it will not participate in any effort to deport immigrants living or working in the city. Officials directed the West Hollywood Sheriff’s Station not to assist federal agencies attempting to deport undocumented workers or immigrants.

Sessions said the Department of Homeland Security issued a report showing that in one week, there were more than 200 instances of jurisdictions refusing to honor ICE detainer requests with respect to individuals charged or convicted of serious crimes. Sessions said “countless Americans would be alive” if these policies of sanctuary cities ended.

“Such policies cannot continue,” Sessions said. “They make our nation less safe by putting dangerous criminals back on the street. … Failure to deport aliens who are convicted of criminal offenses puts whole communities at risk, especially immigrant communities in the very sanctuary jurisdictions that seek to protect the perpetrators.”

“Sessions’ assertion that sanctuary city policies are dangerous is flat out false,” said Congressman Ted Lieu (D-CA). “The truth is that sanctuary counties report lower rates of crime, unemployment and poverty than non-sanctuary counterparts. What will actually make Americans less safe is taking away Department of Justice grants as Sessions is proposing to do.”

Participating in federal immigration enforcement would contradict decades-old policy for the Los Angeles Police Department and Garcetti’s directive, which are based on a principle that the city is safer when officers maintain trust, respect and cooperation with all residents.

“When people feel confident that they can come forward as a victim of or witness to a crime, irrespective of immigration status, the police department’s ability to protect and serve all is enhanced,” the directive said.

In 1979, LAPD Chief Daryl Gates issued Special Order 40, which is still in force today, to prohibit officers from searching people specifically to learn their citizenship or immigration status. Immigrants – undocumented or not – who might be a potential witness to a crime might not come forward to aid an investigation or testify against a criminal if they live in fear of police action against their immigration status.

“In fact, the LAPD has already seen a worrying decline in the willingness of members of the Hispanic community in L.A. to report violent crime – something likely to be correlated with fears of deportation if they should come forward with information,” Schiff said. “Attorney General Sessions’ threat to cut federal funding to sanctuary cities will only exacerbate this problem.”

“We must address our immigration problems with thoughtful and compassionate immigration reform, not threats that prevent cities from utilizing federal dollars to keep their citizens safe,” Schiff said.

On Monday, Sessions said in the current fiscal year, the Department of Justice’s Office of Justice Programs and Community Oriented Policing Services anticipates awarding more than $4.1 billion in grants. He said jurisdictions will have to certify their cooperation as a condition to receive funds, and he added that the department will “take all lawful steps to claw back any funds awarded to a jurisdiction” that wilfully violates the mandates. However, neither Sessions nor Trump’s executive order specify or define sanctuary cities or how they would be labeled or differentiated. Since Trump’s election, and continuing after his executive order in January, municipalities and lawmaking bodies around the country have declared themselves a “sanctuary” jurisdiction. The term generally applies to jurisdictions that adopt policies to limit or restrict cooperation with federal government enforcement actions.

Councilman Mitch O’Farrell, 13th District, said Los Angeles shouldn’t be surprised, as Trump’s administration so far has been consistent with his “hostile, punitive” campaign rhetoric. That’s why earlier this year O’Farrell sponsored a motion instructing the Chief Legislative Analyst and City Administrative Officer to report by April 1 on a list of federal funding streams, and implications of a loss in the event Congress or the president stop them.

“We know it’s hundreds of millions of dollars [in Department of Justice funds,]” O’Farrell said. “But we should not give in to the whims of a tyrant – no matter who that tyrant is.”

O’Farrell said it’s important the city stands up to the Trump administration, and he supports the state Legislature’s actions to challenge Trump’s orders.

It is uncertain if the president can withhold funds or if the federal government can require state and local governments to help carry out deportations. In 2012, the Supreme Court ruled that it was “coercion” to withhold Medicaid funds from states that did not cooperate with President Barack Obama’s health care law. And in an amicus brief filed this month, more than 30 cities and counties – including West Hollywood – asked a federal court to halt Trump’s executive order threatening to withdraw funds from sanctuary jurisdictions. They argue that the order is unconstitutional and that the public would suffer irreparable harm unless the order was halted. O’Farrell said it’s likely the debates will end in court.

“Trump and his cronies will stop at nothing,” O’Farrell said. “If we don’t sign on and support other municipalities, we’re silently culpable.”

The Coalition for Humane Immigrant Rights (CHIRLA), a California-based immigrant rights organization, labeled Sessions’ statements as a “bully’s ultimatum” on cities that celebrate and welcome diversity, including immigrants.

If jurisdictions do not comply with federal authorities in immigration enforcement, despite losing those funds, Sessions said that would be “very disheartening.”

“We have simply got to end this policy,” he said.

O’Farrell and the city council also supported a plan for the city to expand funds to provide legal services for immigrant communities.

After Trump issued his first travel ban, Garcetti said no matter a person’s ethnicity, how they worship, whom they love or the language they speak, regardless of age or cultural background, “you belong here in Los Angeles, and in America.”

Meals on Wheels could fall off under Trump plan