Before a town hall meeting at John Burroughs Middle School became too antagonistic and abruptly ended on Feb. 22, Councilman David Ryu, 4th District, said he would announce a decision on the Miracle Mile HPOZ “in two weeks.” On March 15, Estevan Montemayor, spokesman for Ryu, released a statement. 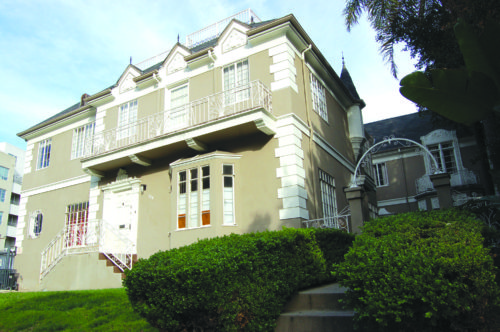 Above, the apartment building at 744 S. Ridgeley Dr. in the Miracle Mile was designed by Edith Northman, the first licensed female architect in Los Angeles, and completed in 1937. The structure was excluded from the Miracle Mile HPOZ boundaries. Last month, the tenants received eviction notices.
(photo by Gregory Cornfield)

“Our office has received feedback from 533 households in support of the HPOZ, and 153 households opposed to it,” the statement read. “From the feedback we’ve received thus far, there is overwhelming support for a historic preservation overlay zone for the Miracle Mile area. Councilmember Ryu is inclined to support the HPOZ, however, our office will continue to review feedback throughout the council approval process.”

The city’s Planning Commission also voted in favor of the HPOZ in December, but not until after it cut areas out of the original boundaries for anticipated density on a major thoroughfare and near the Purple Line Extension. That means buildings along Olympic Boulevard, north of Eighth Street, and west of Orange Grove Avenue will not receive the HPOZ’s protections.

The MMRA is calling on Ryu to return the HPOZ to its original boundaries before the city council votes on it. Ken Hixon, vice president of the MMRA, said they will not “fade away” in their effort to preserve the neighborhood and rent-stabilized units. He said the group has more than 1,100 emails and signatures on a petition to support the original boundaries.

Montemayor added that Ryu is “inclined” to support reinstating the original boundaries, but his office is still reviewing the situation.

According to the MMRA, the excluded structures contain 500 rent-stabilized units, which they said are now vulnerable to Mayor Eric Garcetti’s vision and plan to densify the city along major corridors as the Purple Line Extension makes its way west along Wilshire Boulevard. Indeed, a press release from the mayor’s office last week described the “city’s commitment to [Garcetti’s] inclusive, transit-oriented vision for Los Angeles.”

Members of the MMRA and renters in the buildings believe it will only be a matter of time before developers pick out those rent-controlled buildings that were cut out of the boundaries for the construction of market-rate or luxury housing.

“Our exclusion will mean that developers will soon be evicting us from our homes to continue the demolition of our historic neighborhood to make way for luxury market-rate apartment complexes,” residents wrote to Ryu in February.

That seems to be the case for a rent-stabilized building at 744 S. Ridgeley Dr. – one of buildings excluded from the HPOZ, and the subject of a video released by the MMRA last week.

The video illustrates that on Feb. 15, a demolition permit was submitted for 744 S. Ridgley Dr., and the tenants received unofficial eviction notices five days later.

“The tenant upstairs, she came back down and said, ‘Well, the new owner just evicted us all, and he told me to tell the rest of the five tenants,” said Michael Dykes, who has been living in his unit for almost 12 years.

The tenants show the notice they received with an option to waive relocation fees.

“I’m not signing that form,” said Nick Zayas, who has been a resident there for four years, in the video. “And if [the owner] wants to tear down the building, and if he wants to formally evict us, well then he’s going to have to follow the rules.”

The building was designed by Edith Northman, the first female licensed architect in Los Angeles. The apartment building on Ridgeley Drive was completed in 1937.

“There’s something to be said about a building that’s been standing in the city of Los Angeles for 80 years and looks great,” Zayas said. “We have an opportunity to save a great classic Los Angeles building. A city doesn’t lose its soul in one fell swoop. It gets chipped away bit by bit until what was a city of character becomes a generic metropolis. I hope that doesn’t happen here.”

Zayas and Dykes are joining the effort to return their structure to the HPOZ.

“I think we have a fight in us. And I think I’m going to stay here. I love it here, I put roots down here, and it’s a great neighborhood and I want to stay,” Dykes said. 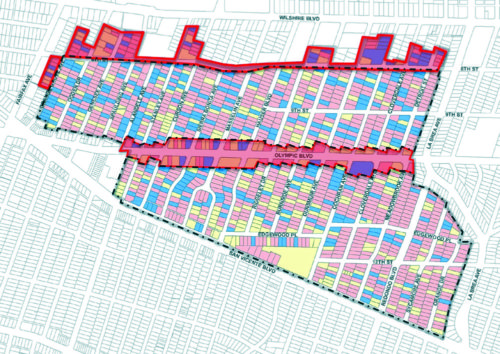 The above map shows the boundaries for the Miracle Mile HPOZ. The darker shaded areas were excluded by the Planning Commission.
(courtesy of the city of Los Angeles)

On March 21, the city’s Planning Land Use and Management (PLUM) Committee will consider the HPOZ, and its new boundaries, before it is sent to the full city council for a vote. The MMRA and its supporters are hoping Ryu or someone from his office is present to fight for the original boundaries. They are afraid, however, that his office might not speak up to save the buildings if the councilman believes one of his colleagues on the city council will vote against him. Ryu will need nine other members to vote with him to override the Planning Commission’s decision.

If he does or does not work to reinstate those buildings, Ryu will still face opposition from the “No on HPOZ” group, which is opposed to the entire HPOZ. Members believe the HPOZ’s accompanying Preservation Plan is too strict in terms of what alterations would be allowed for individual homeowners. The Preservation Plan allows the Miracle Mile community to create guidelines that cater to its specific character and history – an aspect that is particularly attractive in a city made up of dozens of neighborhoods with differing styles.

Here’s a link to video the MMRA produced about the fight to save 744 S. Ridgeley Drive: https://youtu.be/5PQIZOG3zMU